Christendom’s Notre Dame Graduate School (NDGS) is initiating two new programs this summer, one in Montessori catechesis and the other a series of humanities courses on Catholic culture. Both initiatives will hopefully develop into new concentrations for the MA degree. 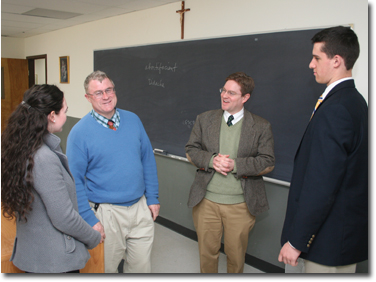 NDGS is working in conjunction with the Montessori Catechetical and Cultural Institute (MCCI) to provide courses and training in Montessori Catechesis. There will be four courses in the series, and NDGS plans to offer one each semester on a two-year cycle. The first course presents Maria Montessori’s educational and catechetical theory, and includes her research into child development and learning which confirms the Catholic and Thomistic notion of the human person. The other three courses will be training courses in the Montessori Catechesis, one course for each of the three levels.

Professor Maggie Radzik will teach the first course, Montessori Catechesis and Family Spirituality, at the Front Royal campus this summer. Professor Radzik is a graduate of Christendom (‘87), the founder and Directress of Siena Academy (a parochial Montessori school) in Great Falls, VA, and a trainer in the Catechesis of the Good Shepherd with the MCCI.

In Front Royal, a Montessori Atrium offering the Catechesis of the Good Shepherd program is very well attended, with many of its students the children of Christendom College alumni.

“Catholic catechesis in the US is often based on the behaviorism of John Dewey, not on a Catholic notion of the human person,” said NDGS Dean Dr. Kristin Burns. “We may teach that man is an embodied spirit, but the educational method we use is based on a philosophy that denies this integral unity and spirituality of man. With Maria Montessori we have a method that matches the content and the truth about the human person.”

The other new program at NDGS is a series of six courses on Catholic culture. Each course focuses on an historical period and aims to understand Christianity’s influence on the culture. The first two courses, The Culture of Classical Antiquity and The Culture of the Early Middle Ages, will be offered this summer at the Alexandria campus. Future courses will study the late middle ages, the Renaissance, the revolutionary period, and modernity. The graduate school plans to offer two of these courses every summer.

The courses will be interdisciplinary seminars in which students will read and discuss original sources across the fields of literature, history, science, and philosophy.

The undergraduate curriculum at Christendom is noted for its integrated, humanities approach. Professors often have degrees in multiple fields and courses are not taught strictly within one discipline but rather often combine knowledge from other fields. The aim of the Catholic culture series is to bring this same integrated humanities approach to graduate studies. Many people with degrees in narrow technical fields such as business, engineering, computer, or natural sciences are looking for a more comprehensive liberal arts program for their graduate studies. This new program in Catholic culture should be popular with elementary and high school teachers looking for a Catholic foundation for their secular knowledge of history, literature, science, or social studies. Teachers need to take certification courses anyway, and if they are teaching in a Catholic school they might be especially interested in courses that focus on Christianity’s contributions to literature, history, science, or philosophy.

“Between them they have nine post-graduate degrees in fields as varied as theology, physics, humanities, English literature, and American studies,” said Burns. “Where else can you take courses like these with a faculty of this caliber? This new program is a superb opportunity for the grad school to mine the riches of the Front Royal faculty, and for students from the metro DC area to benefit from it.”