Christendom’s McGuire to Lecture on Crusades at Rockford Institute 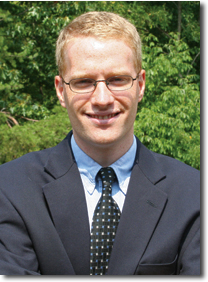 Christendom College History Professor Brendan McGuire has been invited by The Rockford Institute (TRI) to lecture on the Crusades at their annual summer school being held July 8-13 in Rockford, Ill.

McGuire was recruited for his expertise in the history of the Crusades and is very excited to be a part of the program.

“I jumped at the chance because I saw it as an opportunity to help remedy a problem that has been bothering me for years,” McGuire said. “The problem is this: when it comes to the Crusades, most generally well-educated people do not get their information from trained scholars, but from non-professionals—journalists, talk-show hosts, and the like.”

The program intends to set the record straight on the Crusades. “The current attack on the Crusades as nothing more than European imperialism and looting expeditions is a reflection of multiculturalism, whose true name is Western self-hatred,” TRI’s website states. “If you like great stories of high adventure, appreciate brilliant writing and profound theology, then you will not want to miss this Summer School.”

McGuire explained that the last 30-40 years have seen an unprecedented boom in real scholarly research on the Crusades. “The fruits of this research, however, are usually ignored by authors of popular books on the Crusades and producers of television specials,” he said. “Thus, most people, even good Catholics, have a distorted view of the Crusades, which owes more to anachronistic Enlightenment disdain, than it does to fact.”

McGuire will be giving three talks at the summer school. The first will be an overview of how the Crusades have been understood from the Reformation to the present day. The second will be a discussion of the First Crusade and the origins of the crusading movement. The third will be a discussion of the Latin Kingdom of Jerusalem and the crusading of the twelfth century, which includes notables such as Louis VII, Eleanor of Aquitaine, Bernard of Clairvaux, Richard the Lionheart, and Saladin.

TRI is a conservative think-tank, based in Rockford, Illinois. Founded in 1976 it seeks “to preserve the institutions of the Christian West: the family, the Church, and the rule of law; private property, free enterprise, and moral discipline; high standards of learning, art, and literature,” their website states.