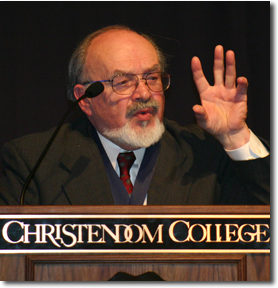 On April 7 Philosopher and Former Christendom College President Dr. Damian Fedoryka delivered an address entitled, John Paul II’s Hermeneutics of the Gift as the Key to Understanding Life and Death to students at Christendom College.

The talk delved into the richness of John Paul II’s often-complex philosophy, highlighting the late pontiff’s emphasis on the importance of the human person.

Fedoryka, currently active at the Center for Personalist Anthropology and Ethics, explained that the gift of God’s love or human love could only be received if a person possesses himself. If he is clinging to a vice such as lust or gluttony, he cannot receive the gift.

“We have to let go of whatever it is that we are holding in our hands,” he said.

After an undergraduate education at the University of Louvain, Belgium, Fedoryka obtained his graduate degrees from Fordham University and the University of Salzburg, Austria. He has taught at several universities, including Franciscan University of Steubenville and Ave Maria College. Fedoryka has also lectured and worked extensively with youth in Austria and in the Ukraine, his native land.

Fedoryka said that John Paul II identifies the very meaning of sin as not consisting in the receiving of the gift, but in the appropriation of the gift and the rejection of the giver and his love.

Receiving the gift is a very important notion, because it means the opening of oneself, which is something that only the human person is capable of, Fedoryka explained.

John Paul helps us to understand that a central characteristic of the human person is the power to possess ourselves. “When you are not your own, you can not give yourself in love. Because when you are tempted by satisfaction and you yield to temptation—not called or invited by goodness, beauty, or truth—what happens? You let go of yourself. You lose possession of yourself,” he said.

Concluding Fedoryka said that ultimately the whole mystery of life and death can be reduced to this: “that we must open ourselves to the gift, which is initiated by the giver who, as it were, breathes it into us.  We come alive when we open and receive it.”

His talk was well received by students who were able to ask him questions after the talk and in St. Kilian’s Café.

This informative lecture can be heard at Christendom on iTunes U.