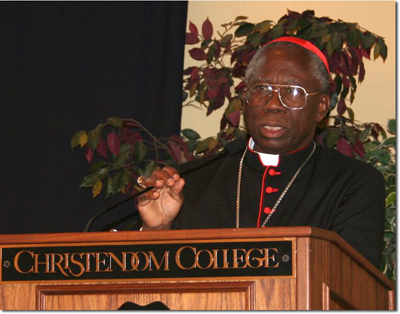 On April 18, the College community gathered in the Chapel of Christ the King to attend a special Mass celebrated by Francis Cardinal Arinze, Prefect of the Congregation for Divine Worship and the Discipline of the Sacraments. Following the Mass, Dr. Joaquin Navarro-Valls, former Press Secretary to the Holy See, was given an Honorary Doctorate in Humane Letters at an Academic Convocation held in the St. Lawrence Commons.

“I am well aware that the mission of this College is ‘to bear witness to the whole truth about God, man, and the created order,’” Navarro-Valls began his address at the Convocation.

He continued to describe the College’s mission as an institutional commitment of exceptional bravery witnessed “in both the academic syllabus and the extracurricular activities—a combination for which the College is well known for.”

Navarro-Valls’ address focused on the relationship between faith and culture.

“Christian thought needs universities as places in which the Faith can take—let’s say—bodily form and become culture. It is a task that is yours,” he said.

The highlight of the celebration weekend was the Thirtieth Anniversary Benefit Gala Dinner Dance held at the Washington-Dulles Hilton, on the anniversary date of the election of Pope Benedict XVI, April 19.

The event, which raised $250,000 in Student Aid, was attended by over 500 of Christendom College’s faculty, staff, students, benefactors, and guests. Warren Carroll, Damian Fedoryka, and Timothy O’Donnell, the College’s three presidents since its 1977 founding, were in attendance as were many of the founding faculty members. Cardinal Arinze and Navarro-Valls served as the Chairman of the Honorary Dinner Committee for the event.

In his remarks to the guests, Cardinal Arinze was pleased to read a congratulatory letter from the Vatican’s Secretary of State Cardinal Bertone on behalf of Pope Benedict XVI in which the Holy Father imparted his Apostolic Blessing on the College.

“It is a joy for me to be associated with whatever has to do with the good of Christendom College,” the Cardinal said. “This is good news in our time.”

On Sunday morning, Cardinal Arinze celebrated a Solemn Mass of Thanksgiving at Christendom’s Chapel of Christ the King during which he told the congregation that “for thirty years Christendom College has given distinguished service as an authentic academic institution. It has performed admirably to live, to show, and to share its Catholic character. And it has educated citizens that are a credit to Church and society.”

The weekend concluded with special champagne brunch where the College community was able to say farewell to the Cardinal.