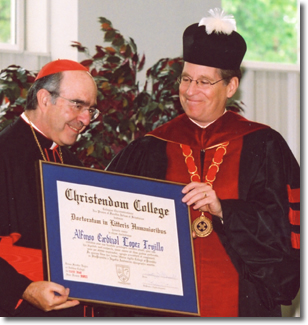 Christendom College President Dr. Timothy T. O’Donnell expressed sorrow on behalf of the entire college community at the passing of Alphonso Cardinal Lopez-Trujillo who died of cardiac arrest on April 19 in Rome.

“His Eminence Cardinal Trujillo was a dear friend of Christendom College and a personal friend to my wife, Cathy, and me,” O’Donnell said. “It was an honor to come to know him while working with him on the Pontifical Council for the Family. We will always treasure the memory of his courageous witness to the faith and defense of the family, especially during his participation in the College’s Commencement Exercises in May 2002. Cathy and I were very blessed to have had lunch with His Eminence at his home this last November. He will be greatly missed, but we will continue to remember him in our prayers and draw inspiration to continue to defend the integrity of the family.”

Cardinal Trujillo, a Columbian, was elevated to cardinal in 1983, and in 1990 he was named president of the Pontifical Council for the Family. Often attacked by the secular press and organizations, he faithfully defended Church teachings on the family and human sexuality.

“His extensive ministerial work, carried out as a priest and auxiliary bishop of Bogota, as archbishop of Medellin, as secretary and president of the Latin American episcopal council, president of the Colombian episcopal conference, and finally, as president of the Pontifical Council for the Family, is a clear testimony of his deep love for the Church and his dedication to the noble cause of the promotion of marriage and the Christian family,” Pope Benedict XVI said in a message to the late cardinal’s family.

Christendom College will offer a Mass for the repose of the soul of Cardinal Trujillo on the same day as Pope Benedict XVI: April 23, 2008, at 11:30 a.m.

Eternal rest grant unto Cardinal Lopez-Trujillo, O Lord, and let perpetual light shine upon him. May his soul and the souls of all the faithful departed rest in peace. Amen.