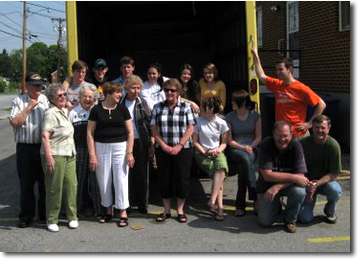 A group of students from Christendom College lent their time and talent on Saturday, April 26 to help a local nonprofit, The Congregational Community Action Project (C-CAP), move to a new location.

The Catholic Charities cargo van met a group of Christendom students at the college and led them to the C-CAP site. The students assisted the volunteers in getting their office moved and set-up in the new location. The students also helped organize C-CAP’s new food pantry, which will now be ready to serve hungry residents of the Front Royal area.

According to Bill Bene, local resident and longtime C-Cap volunteer, the Christendom students were a wonderful help to the organization.

“We did not have either the person power or the financial resources to support the move. The joyful Christendom students lent their muscle to the move and saved all of the C-Cap staff countless hours of hard work,” he said.

For many years, C-CAP operated out of the Front Royal Presbyterian Church but the program outgrew their former small office. After much searching, they finally settled on a nearby location in the basement of the town’s clinic.

C-CAP is a local nonprofit organization designed to prevent homelessness and it regularly feeds the poor. The agency is funded by local churches, civic groups, individuals, and businesses in the Front Royal area.