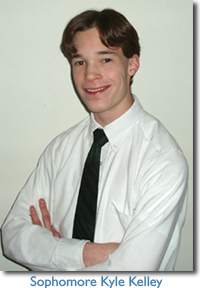 Christendom College students participated in the 2008 National Greek Exam, with all 15 receiving awards for their exceptional performance.

The awards for the exam are broken into various sections, with highest honors first, followed by high honors, honors, and then merit awards.

Sophomore Kyle Kelley’s performance on the NGE was particularly significant. Kyle has only completed elementary Greek but scored better than many upperclassmen who sat for the same exam. There were no perfect papers on this exam nationally, so Kyle and Sheila Jenné are among those earning the highest scores on this exam this year, one error each. The faculty of Classical and Early Christian Studies congratulates all these Greek students and thanks Professor Fred Fraser, who helped prepare them to sit for the exam.