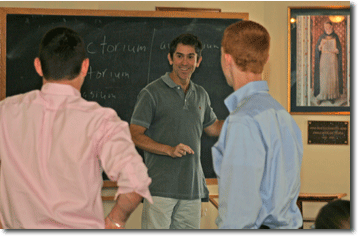 Christendom Classics Professor Mark Clark and Professor David Morgan of Furman University taught students in the intensive Latin course, using the same method that modern language immersion programs use, as well as the Latin teaching traditions of the Church. Students found the program to be very challenging, yet at the close of the one-week program, the students were longing for more, Clark said.

Clark describes the classes as a type of intensive Latin Kindergarten. They used Orberg’s Lingua Latina, as well as dialogues from fifteenth, sixteenth, and seventeenth century courses, modifying them to suit the students’ needs. The Gospels were also used by mimicking the many conversations Jesus had with others. “It’s an easy way to teach youngsters how to begin to think with different thought structures,” Clark said.

Besides studying Latin, students were able to go on a hike on the famous Skyline Drive and take a trip into nearby Washington, D.C.

“It was great to see the students speaking Latin outside the classroom as well,” Clark said.

Clark started the program in response to a serious need in the Church. “The Church has a treasury of Latin literature spanning almost two millennia, which is now sitting like an unnoticed trunk in the attic. Two generations ago, there were priests who knew Latin well enough to work on that tradition—the greatest historians of medieval theology in the twentieth century, for example, were priests and even bishops—but now only a handful survive,” he said.

This, coupled with a failure by modern school systems to teach Latin, has created a dire need in the Church for those who can work fluently with Latin.

“A sign of how bad things have gotten is that even Vatican documents are written in the vernacular and then translated into Latin that isn’t really Latin,” Clark said. “We are, in short, in real danger of being cut off from our own tradition. The need, therefore, is crystal clear. And it seems much the best course to teach young people whose ideals are in the process of being formed, so that they may decide to serve the Church in this way.”

Due to the enthusiasm of the students and a high level of interest, two one-week sessions are being planned for next year. Students will have the opportunity to attend one or both sessions. The College only accepted twenty-six students into the program this year, but received applications from close to fifty students and had to place students on a waiting list.