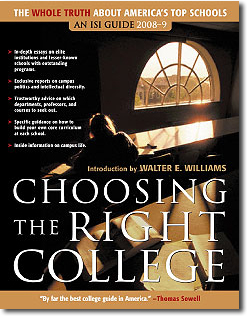 Christendom College is once again included in the Intercollegiate Studies Institute’s Choosing the Right College:The Whole Truth About America’s Top Schools. This sixth edition of the guide provides an independent, truthful assessment of what is really happening at the top 134 colleges in the nation and also provides specific advice on which professors to seek out.

“The guide has become the most valuable and trusted college guide on the market for students seeking a genuine liberal education,” ISI’s website states.

According to the guide, Christendom College is “flourishing, having gained a reputation for academic excellence, doctrinal fidelity, and a wholesome atmosphere where students cheerfully embrace the ancient traditions of Catholicism.”

The guide speaks highly of Christendom’s strong core curriculum and fidelity to the Catholic Church and the Pope. “Don’t expect to find The Vagina Monologues on campus,” the guide states.

“The unfortunate fact is that many college classes today consist of little more than indoctrination in leftist propaganda,” Walter E. Williams says in the guide’s introduction. “Yet, despite the fact that the vast majority of colleges are pervaded by leftist ideology, it is still possible to get a good, nonideological liberal arts education.”

“It’s great to be included in Choosing the Right College once again,” College President Dr. Timothy O’Donnell said. “Inclusion in such prestigious guides not only gives witness to the great work we are doing at Christendom, but also helps us connect with future students who think that Christendom is the right college for them.”