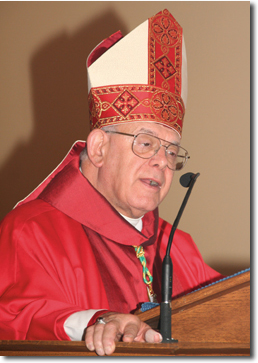 Christendom opened its doors to a record 148 new students (123 freshmen, 18 transfers, and 7 re-admitted students) on August 22. Coming from 45 different states, as well as Kenya, Hungary, Belgium, Columbia, Canada, Japan, and England, this year’s student body of 421 is the largest in the history of the College.

“We’ve had the best recruiting year ever,” Admissions Director Tom McFadden said. “Last year we brought in 115 new students and had a total student body of 397. Considering all the talk of recession, the housing problems, the declining dollar, and all the doom-and-gloom we read about in the news, it is really a remarkable achievement to have been blessed with all of these young, dedicated Catholic students. Of course, when you have great men like Pope Benedict XVI, Cardinal Arinze, Cardinal O’Malley, and Archbishop Burke commending and praising our college over the past year, it makes my job a lot easier.”

Prestigious students who want to learn more about the liberal arts and who want to immerse themselves into the truly Catholic culture on campus are seeking out Christendom, McFadden said.

“Admissions essay after admissions essay, I read that today’s youths are so eager to be different than their peers,” he said. “They don’t want to simply go to college, they want to become part of something, and they see Christendom as part of the solution to today’s problems, both in the Church and in the world.”

On August 31, Arlington Bishop Paul S. Loverde celebrated the Mass of the Holy Spirit where he witnessed the entire faculty take the Oath of Fidelity to the Magisterium. Christendom is one of a few Catholic colleges whose entire faculty voluntarily takes this oath annually.

Also, on September 14, the Feast of the Exaltation of the Holy Cross, Christendom celebrated its thirty-first Anniversary with a Rosary procession in which Chaplain Fr. Gee carried a relic of the True Cross.

“This is an exciting year for us,” O’Donnell said. “Our thirtieth anniversary celebrations and the visit to the US by His Holiness Pope Benedict XVI have filled our campus with energy and Pauline zeal. The Pope has dedicated this year to St. Paul, and the College will follow his lead. When I attended the meeting of Catholic educators in April, our Holy Father affirmed the mission of Christendom, yet also challenged us to go deeper—to put out into the deep. And, so, as our student body grows, it is my hope that spiritually we will grow, too.”

The largest in the history of the College, the freshman class of 123, with an average SAT score of about 1840, includes 50 siblings of other Christendom students or alumni and 12 alumni children. Additionally, 50% of those who participated in last year’s High School Summer Program chose to attend Christendom this fall.

According to the Admissions Office, the College received a record number of applications this year and has already received many applications for both the Spring and the Fall semesters of 2009.

Freshman student Lizzie Crnkovich from McLean, VA, said that she is extremely happy to be at Christendom.

“I attended the Latin Immersion Program and the two-week ‘Experience Christendom’ Program this summer and just knew that I had to attend the College this year,” she said. “Now that I am here, I feel right at home, like I’m part of a family. The best part of being here is that I don’t have to search very hard to find other young people who have the same core beliefs and values that I have. Everyone here is on the same page when it comes to the important things in life, and as a result, it is much easier to focus on being a student and on my vocation to holiness. I heartily recommend it to anyone!”

With over 91 percent of last year’s freshmen returning for their sophomore year, and with a summer attrition rate of only 5 percent (the number of non-degree earning students who choose not to return to Christendom) – half of what it normally is – the entire College community is very excited to move forward and see what this historic year will bring.