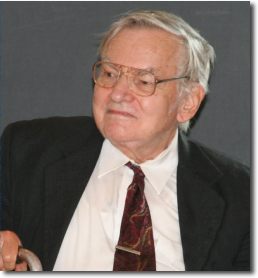 “He believed the gods of Homer and ancient Egypt were with him, and we know as Christians that the One True God must have been with him,” Dr. Warren Carroll said on September 22 during his public lecture on Alexander the Great. “For by his march across the world, Alexander the Great prepared the way for its conversion.”

Carroll explained that due to the conquests of Alexander, the entire ancient world spoke Greek, which made it possible for the spreading of the teaching of the Gospels, which were written in Greek.

“Alexander’s conquests united the world of the Middle East with the Classical world of Greece and Rome—for the first time in history,” Carroll said. “Jew and Greek entered the same cultural orbit.”

A convert to Christianity, Carroll was educated at Bates College and received a Doctorate of History from Columbia University. After founding Christendom College, he served as the College’s president until 1985 and then as the chairman of its History Department until his retirement in 2002. He is the author of numerous historical works including The Rise and Fall of the Communist Revolution, 1917: Red Banners White Mantle, and his major multi-volume work The History of Christendom.

Carroll’s spirited lecture focused on the historic march of Alexander, whom he described as being “more an elemental force than a mortal man.”

Alexander never lost a battle and, with the exception Napoleon, actually and deliberately aspired to take over the whole civilized world. There is no convincing evidence that Alexander was driven by power and wealth for their own sakes, but the cultural unification of East and West was his explicit and announced objective, Carroll said.

“His teacher was the supreme Greek intellect, the philosopher Aristotle,” Carroll noted. “Alexander was always a Greek first, and considered himself the guardian and champion of Hellenic culture.

“He was the greatest general of all time…He might have conquered the world, but died before he was forty, with his armies at the border of China. He was a meteor and transformer of history, who created the Hellenistic world through which the Gospel of Jesus Christ spread three hundred years later.”

This dramatic lecture can be downloaded at Christendom on iTunes U.