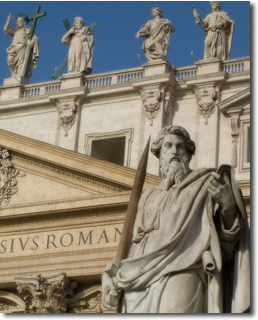 In an effort to better celebrate the Year of St. Paul, Christendom College President Dr. Timothy O’Donnell will be leading a Pauline pilgrimage from March 2 – 13, 2009, traveling in the footsteps of St. Paul on his path to Rome by visiting Malta, Sicily, Naples, and Rome.

Departing from Dulles Airport outside of Washington, DC, the pilgrims will land in what Dr. Warren Carroll refers to as, “the most Catholic country on earth”—Malta.

After being shipwrecked on the island, St. Paul spent three months in Malta, preaching the Gospel, and converting many Maltese to Christianity during his stay.

While in Malta, the pilgrims will visit the House of Parliament; the Fine Arts Museum which features art collections from the Knights of St. John as well as paintings by Tintoretto and other masters; the church dedicated to the Assumption of the Virgin Mary; and the beautiful St. Paul’s Church which overlooks the piazza.

After taking a ferry from Malta to Sicily, the pilgrims will continue to Ragusa and visit the Cathedral of St. John the Baptist and palaces built during the 18th Century, famous for their Sicilian Baroque and Gothic Architecture.  Later, they will travel to Agrigento and Palermo where they will visit the famous Valley of the Temples, including the largest Doric temple in the world, the Temple of Jupiter.  Afterwards, they will take a sightseeing drive to Palermo, a historic city in southern Italy, the capital of the autonomous region of Sicily and the province of Palermo. The city is noted for its rich history, culture, architecture and gastronomy, playing an important role throughout much of its existence; it is over 2,700 years old.

The O’Donnells will then lead the group to the Cathedral of Palermo. They will visit the Palace of the Normans and the Palatine Chapel which used to be the royal residence in Norman times, now the seat of Regional Parliament.   Afterward, the group will proceed to Monte Pellegrino that overlooks Palermo’s bay to visit Santa Rosalia’s Sanctuary. After a short drive, the pilgrims will then visit Monreale to tour the exquisite church of San Giovanni degli Eremti, the 12th century hillside Cathedral Monreale, lavishly decorated with more than 6,000 square yards depicting the Old and New Testaments. Following Monreale, they will transfer to Palermo port and sail to Naples.

After landing in Naples, the group will drive to Pompeii, best known for its burial in volcanic ash.  They will visit the ruined city dug out from the ashes rained on it by Vesuvius in AD 79 and then go to the Basilica of Our Lady of the Rosary in Pompeii. The pilgrims will then travel on the original Via Appia, stopping at Three Taverns on the Ancient Appian Way where St. Paul was first greeted by the Christians from Rome.

The group will spend four days in Rome, touring the city and visiting the many Pauline sites, including the prison where St. Paul and St. Peter were kept; the place of Paul’s beheading; and the church of St. Paul Outside the Walls under which the tomb of  St. Paul can be viewed.  Also, the group will have a papal audience with Pope Benedict XVI in St. Peter’s Square during their time in Rome.

This pilgrimage is open to all and space is limited. For more information about this exciting pilgrimage, please contact Miss Melanie Baker at 800.877.5456, ext. 1211 or melaniebaker@christendom.edu.