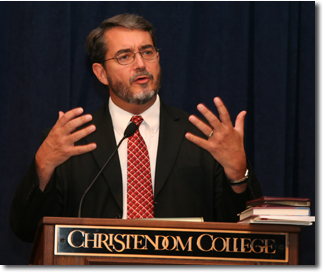 “In the last forty years, not Catholic, but Protestant biblical scholars are the ones who have caused us to revisit Paul and rethink many misunderstandings of Paul that are rooted in Luther’s own misreading,” Hahn began.

An exceptionally popular author, speaker, and teacher, Hahn has delivered numerous talks nationally and internationally on a wide variety of topics related to Scripture and the Catholic faith.

In his address, Hahn told the audience that although we tend to think that Paul fell off a horse when he had his vision and converted, in reality, there is no mention of a horse, just a bright light.

“We tend to think of him falling off of a horse because it says that he fell to the ground,” Hahn said, “ but actually, Paul was probably walking to Damascus.”

Paul was not converted in the traditional sense, but was called by Christ and converted “not from Judaism to Christianity, but from a naturalistic understanding of the Jewish faith to truly supernatural experience of the divine grace and righteousness of God through Christ,” he said.

He also gave deep insights into some of Paul’s writings, pointing out that it was St. Paul who first used the term “Body” for the Church, with Christ as the Head and all the members comprising the body. Hahn concluded by exhorting his listeners to realize that conversion is not something that happens once, but something that happens continuously.

“Every day we must take up our cross and follow Him,” he said. “We do not simply convert and we are saved once and for all. We must change our lives, as St. Paul did, and follow Christ daily.”

Hahn concluded saying, “No matter how willful or stubborn we may be, God the Father has sent his Son to give us the Holy Spirit to mend, heal, and divinize us.”

This theologically rich lecture can be heard at Christendom on iTunes U.