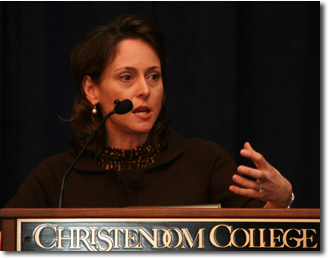 “There is something imbedded in the root of our culture that is missing out on the most important thing about life,” President and Co-Founder of Healing the Culture Camille Pauley said to the students and faculty of Christendom College in an address given on October 13. “And it is because of this that our culture is in dire straits.”

A co-founder of the Center for Life Principles with Fr. Robert Spitzer, Pauley collaborated on his best-selling pro-life book, Healing the Culture: A Commonsense Philosophy of Happiness, Freedom, and the Life Issues. She received her B.A. in Communication from the University of New Mexico with an emphasis in television broadcasting, and an M.A. in Communication from Washington State University with an emphasis in rhetoric and public debate.

Pauley has trained tens of thousands of students and professionals in Fr. Spitzer’s “Life Principles” curriculum, and has defended the sacred dignity of human life in thousands of international venues through media and personal presentations. She has guest-hosted several radio and television programs, has co-produced five video series, and has authored numerous pro-life articles, booklets, and retreat programs.

In her address, Pauley told the story of her husband who defended the pro-life position in a high school debate. His line of argument was clear and strong and both teacher and students agreed that he had won. At the end of the debate his opponent came up to him and said, “You can have all the logic and intelligence and points and evidence that you want, but at the end of the day abortion is still legal and if I want to get an abortion, I will and there is nothing that you can do about it.”

Pauley asserted that it is not enough that we have an intelligent explanation and sophisticated defense of the pro-life movement.

“Our arguments are far more sophisticated than the other side,” she said. “But it is not enough that we have that sophisticated dialogue. We must also give people a reason to care. Too many people have bought into the lie that what makes life worth living is material wealth, possessions, popularity, admiration, and ego-high. They buy into this lie.”

Pauley urged listeners to both pray for a pro-life culture and give a good example through how they live, so that they can become living witnesses to others about what makes life truly worth living.

“If you want a pro-life culture, teach the culture about what is truly worthy of them,” she concluded. “Because if they don’t know who they are, if they don’t value the goodness and dignity and the image and likeness of God in themselves, they will not value the dignity and likeness of God in an unborn child. Give them that gift—the gift of love, the gift of faith, and the gift of hope—and you will build a pro-life culture.”

For more information about Healing the Culture visit www.healingtheculture.com. This engaging lecture can be heard at Christendom on iTunes U.