College Players Light Up Stage with The Secret Garden 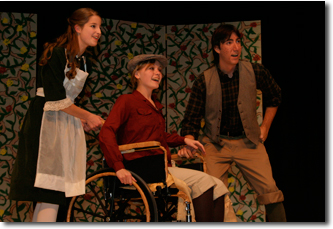 Based on the beloved story by Frances Hodgson Burnett, the Players production was directed by Christendom alumnus Michael Powell and produced by English professor Patrick Keats.

Set in 1906, the musical tells the story of a young English girl named Mary.  When her parents die in a cholera outbreak in colonial India, Mary is forced to move to England and live with her estranged Uncle Archibald and her invalid cousin. There she discovers a hidden garden that has fallen into disrepair. Mary bravely overcomes many obstacles and, with the help of a young gardener, brings the garden back to life, as well as new life to her cousin and uncle.

Cyrus Artz filled the theater with his deep and dramatic voice as the crooked-spined Uncle Archibald. Meghan Kelly played the role of the young girl Mary with great emotion and charmed audiences with her voice. She had great chemistry with Brianna Miller who captured the childish spirit of Colin amazingly.

Bridget Randolph and Tim Curran brought great energy and mirth to the stage as Martha and Dickon. The complex character of Dr. Craven was executed well by Dominic de Souza and Kieran DuFrain gave the character of Ben his essential kindness with a rough edge. An ensemble of ghosts supported the cast, bringing excitement and dramatic movement to the stage. Of note was Jacqueline Kenny whose gorgeous voice brought the character of Lily back to life.

“The music was absolutely amazing! Without a doubt my favorite song was Dominic and Cyrus singing Lily’s Hazel Eyes,” student and costume designer Allison Firehammer said.

The vocal talent was matched with a student orchestra conducted by alumnus Jonathan Dittert.

“We had actually only started practicing with them 6 days ago, so for them to have been able to follow crazy people like us is incredible,” Cyrus Arts said following a performance.

Every year the Christendom Players produce two plays: one in the fall, usually a musical, and one in the spring.  And because Christendom does not have a drama department, students from across all disciplines are welcome to audition for the performances.