Fr. James Schall Tells Students How to Be Teachable 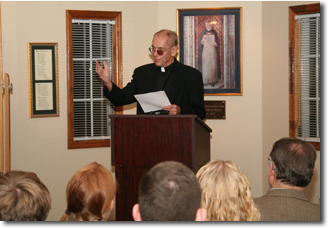 “Everyone knows of someone with a very high IQ who never did anything with it,” Fr. James Schall told the audience of a crowded Thomas Aquinas Lecture Hall on November 5. “He never achieved his potential, as they say—we may even suspect it of ourselves.”

The Cincinatus League of Christendom College and the Intercollegiate Studies Institute sponsored Schall’s lecture, which was entitled “Docilitas: Its Importance for Liberal Education and Knowing What It Is”

Schall, a Professor in the Department of Government at Georgetown University, has written numerous books including: Reason, Revelation, and the Foundations of Political Philosophy and Jacques Maritain: The Philosopher in Society. He also writes columns for Gilbert! and InsideCatholic.com.

In the lecture, Schall explained that not everyone is teachable, but it requires a certain disposition on the part of the student—an openness to receive the gift of knowledge.

“I’ve always loved that Latin word docilitas—the capacity of being taught,” Schall said. “‘Teachableness’ implies something beyond IQ’s—or whatever is said to measure ones native intellectual capacity. Not only our capacity to know, but also our desire from within to know and do something to acquire knowledge of what we know we do not yet know.”

Schall said that the reason why we are not interested in a particular subject is not because something is wrong that subject, but that there is something wrong with us. “So you recall what Chesterton once said, ‘There is no such thing as an uninteresting subject. There are only uninterested people,’” Schall said.

Much of our “teachableness” comes from our upbringing.  Schall pointed out that Chesterton and Aristotle have noted that we need to be brought up with fine habits if we are to be adequate students of what is fine a just.

Schall concluded charging students, “to strain every nerve to live according to the best thing in us. All parts of nature are marvelous. A half glance of the person you love is more delightful than a leisurely view of other things. Our restless hearts define our being from our very inception. We are in the world to direct our hearts to the rest in which they begin. We cannot ultimately give ourselves, and this is why we exist, and why we are first receivers.”

Student and President of the Cinicinatus League Tara Jackson found the talk “to be a breath of fresh air, especially after the election of our most liberal president. It was so refreshing to hear very astute and conservative advice explaining that a liberal arts education is about living the Truth in humility,” she said.

This amazing lecture can be heard at Christendom on iTunes U.