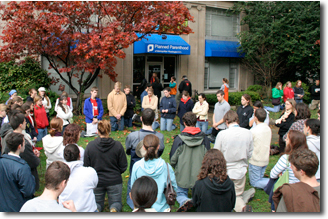 Over 50 Christendom students prayerfully protested at the Planned Parenthood Abortuary in Washington, D.C. on November 15. The gathering was one in a series of weekly protests organized by the pro-life student group Shield of Roses.

Students prayed three rosaries and the Divine Mercy Chaplet, concluding with the Litany of Saints and a hymn.  A few students from Catholic University of America joined their ranks as well.

As students prayed on the lawn outside the abortuary, a few trained students acted as “Sidewalk Counselors.”  Counselors speak to those entering the abortuary in an attempt to change hearts and give a voice to the child inside.  Their appeals are sometimes frustrated by the Planned Parenthood escorts who try to limit their interaction with clinic visitors, drown out their words, and deride their efforts.

One of Counselors, Kathryn Kujawski, commented on her dealings with the abortuary’s orange-clad escorts saying that the escorts don’t respect the protesters, but most of the time they don’t cause much trouble. Still, there are a couple escorts who show up from time to time and do try to make trouble.

Every Saturday, after attending the 7:30 a.m. Mass on campus, Shield of Roses makes this trip to peacefully protest abortion. This tradition was established at Christendom in the early ‘80’s and continues up to this day.

In addition to Shield of Roses, a newly formed pro-life group, Students for Life, participates in literature drop-offs and many other activities, including projects with the American Life League.

Christendom students are known for their political activity.  In a 2008 report on “Excellent American Colleges,” the Free Congress Foundation stated that Christendom College is “a conservative thorn in the side of our nation’s capital …One would be hard pressed to find a more faith-filled and politically active student body in the United States.”