Friend of the College Avery Cardinal Dulles Dies at 90 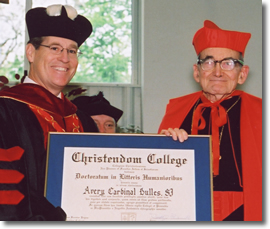 In 2003, Cardinal Dulles offered the Baccalaureate Mass in the Chapel of Christ the King and presided over the College’s Commencement Exercises.  The College awarded the Cardinal an Honorary Doctorate in Humane Letters during the ceremony.

“Treasure the fact that you have been given a Catholic education in which the truth of revelation was not severed from the truth of the human sciences,” Cardinal Dulles told students 5 years ago. “There are many rivers of truth, but in the end they merge into one undivided stream. When the perennial questions are seriously asked, Christ can be recognized as the encompassing truth. Truth in the end turns out to be a Person, a person whom we encounter both in the proclamation of the Gospel and in the ministry of the sacraments.”

He concluded by saying that “at Christendom College you have…learned to love the Eucharist. Take that love with you wherever you go. The more your life is centered on this sacrament of sacraments, the more energized will it be in all its dimensions. Neither death nor life nor anything under heaven will be able to separate you from Him who is the Way, the Truth, and the Life.”

Commonwealth Magazine quoted the Cardinal’s “Farewell Address” given at Fordham University this past summer:

I often feel that there is no one on earth with whom I would want to exchange places. It has been a special privilege to serve in the Society of Jesus, a religious community specially dedicated to the Savior of the world. The good life does not have to be an easy one, as our Blessed Lord and the saints have taught us. Pope John Paul II in his later years used to say, “The Pope must suffer.” Suffering and diminishment are not the greatest of evils but are normal ingredients in life, especially in old age. They are to be expected as elements of a full human existence.

Well into my 90th year I have been able to work productively. As I become increasingly paralyzed and unable to speak, I can identify with the many paralytics and mute persons in the Gospels, grateful for the loving and skillful care I receive and for the hope of everlasting life in Christ. If the Lord now calls me to a period of weakness, I know well that his power can be made perfect in infirmity. “Blessed be the name of the Lord!”

Eternal rest grant unto Cardinal Dulles, O Lord, and let perpetual light shine upon him.  May his soul and the souls of all the faithful departed rest in peace. Amen.