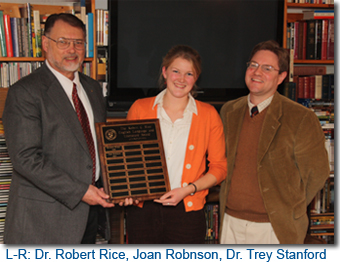 Senior Joan Robinson received the Robert C. Rice English Language and Literature Award on December 11 after defending her thesis before professors and peers.

“While the award is typically given out at the end of the spring semester, the candidate singled out this year by the English faculty is graduating this semester, so we felt we should honor her in front of her peers and her major faculty, who are very proud of her,” Literature Professor Dr. Trey Stanford said.

“Joan is a young lady we will greatly miss at Christendom College, but of whom we expect great things.” As the Award states, Joan Robinson has distinguished herself in “exemplary scholarship, collegiality, and surpassing skill in written composition and oral address.”Dr. Robert Rice, who hosted the Thesis Defense and Award Ceremony at his house, said that Joan is a model student. “In every respect, Joan Robinson is a model of excellence in the discipline of literary study and the arts of discourse, written and spoken.  She is a model, likewise, of the Christendom student whose life of the mind is at one with the life of the spirit, whose intellect and will are consecrated to Christ.”

Robinson was thrilled to receive the reward calling it “a great honor.”

“I can only return the honor in gratitude to Dr. Rice, Dr. Stanford, and the professors of the Literature Department who have worked so hard to give me that sacramental and Catholic literary perspective that I hope to draw from as I pursue graduate studies in the humanities and a future in teaching,” she said.