Students Lead Hundreds of Thousands in the March for Life

On January 22, the entire student body of Christendom College, including members of the faculty and staff, led hundreds of thousands in protesting abortion at the 36th Annual March for Life in Washington, D.C. Select students were given the honor of carrying the lead March for Life banner as well as the official March for Life flags. 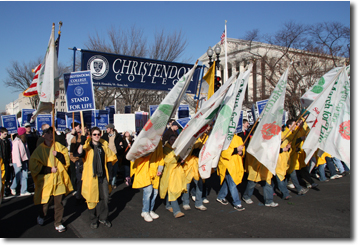 Buyers said that being in the lead was exciting and that, despite all the reporters, “it was very peaceful.”

“I always enjoy the March for Life,” Junior Steven Ginski said. “It is a great gathering of people who may not all be of the same denomination, but agree on this one fundamental issue that should be deciding politics today.”

Ginksi thought it was a great honor for the College to carry the lead banner as well. “You felt almost like a crusader—which is our mascot. We were doing what are called to do,” he said.

Senior Maria Gutschke found it encouraging seeing so many pro-life people. “You look down Constitution Avenue and, beyond what the eye can see, there are pro-life people—you really feel a sense of solidarity.”

Students prayed the rosary and sang hymns as they marched. When they turned the corner onto 1st Street to face the Supreme Court building, their prayers turned to the classic chant, “Hey, hey, ho, ho, Roe V. Wade has got to go!”

“We are deeply grateful to Nellie Grey for allowing Christendom to lead the March for Life at this historic time,” College President Dr. Timothy O’Donnell said. “The dignity of all human life is something that is communicated very clearly in the course of studies here at Christendom College. Our students’ participation in leading this March provided a great opportunity to manifest concretely, through their actions, what they have learned in the classroom and help fulfill the College’s motto, ‘to restore all things in Christ.'”

Since its founding over 30 years ago, Christendom College has routinely canceled classes on the day of the March, and the Student Activities Council charters as many buses as needed to transport all 400+ students, and numerous members of the faculty and staff to the March. Its students are active in pro-life work year round, leading prayerful protests at a Planned Parenthood Clinic in Washington once a week, as well as taking part in sidewalk counseling and other pro-life activities.