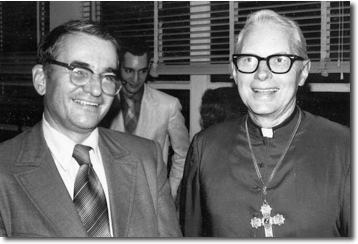 Bishop Welsh was ordained a priest in 1946 in Philadelphia and in 1974 became the founding bishop of the Diocese of Arlington, Va. He then served as bishop of the Allentown diocese from 1983 to 1998, when he retired.

Welsh was a great friend and supporter of Christendom College. He was instrumental in the acquiring of the land on which Christendom’s Front Royal Campus rests, as well as providing Christendom with its first chaplain. He presided over the college’s first commencement exercises in 1980. He received an honorary doctorate from the college in 2004 and spoke at the 2007 Summer Institute. This talk is available at Christendom on iTunes U.

“Bishop Thomas Welsh was an outstanding shepherd and a warm friend of Christendom College,” College President Dr. Timothy O’Donnell said. “When the College was first established, he would visit frequently and generously spend a great deal of time with our students. He was always supportive of the efforts of our founding president, Dr. Warren Carroll, to found an orthodox Catholic liberal arts college here in the Diocese of Arlington. He stayed close to the College over the years. His solicitude for Cathy, me, and Christendom was always a deep source of consolation over the years. His smile, charm, and unfailing charity will be deeply missed.”

Eternal rest grant unto Bishop Thomas Welsh, O Lord, and let perpetual light shine upon him. May his soul and the souls of all the faithful departed rest in peace. Amen.

A special commemorative Mass for Bishop Thomas Welsh will be held Thursday, March 5, 2009 at 11:30 a.m. in the Chapel of Christ the King.