Author and Georgetown Associate Professor of Government Patrick J. Deneen will deliver a lecture entitled Men of Great Faith: The Democratic Vision of the Anti-Federalists at Christendom College on March 26 at 8:00 p.m. in St. Thomas Aquinas Hall. 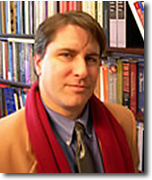 The lecture is hosted by the Christendom College’s Cincinnatus League, an Intercollegiate Studies Institute campus organization. The lecture is funded by the Leadership Institutes’ ROCK (Revitalize Our Conservative Knowledge) speaker grant, for which Senior James Tillman, Vice President of the League applied.

“We are so excited for Dr. Deneen’s lecture! It is an honor for the Cincinnatus League to host a speaker of such distinguished academic caliber,” League President Tara Jackson said. “And, it is a sincere privilege to provide a forum for discussing conservative ideas.”

Patrick J. Deneen holds the Markos and Eleni Tsakopoulos-Kounalakis Chair in Hellenic Studies at Georgetown University. His interests include ancient political thought, American political thought, democratic theory, religion and politics, and literature and politics. He is the author of The Odyssey of Political Theory (2000) and Democratic Faith (2005), as well as co-editor of a book entitled Democracy’s Literature (2005). He has also published a number of articles and reviews in such journals as Political Theory, Social Research, Polity, Polis, First Things, The Weekly Standard, Perspectives on Political Science, Society, The Hedgehog Review, and Commonweal. He is currently working on a book examining the concept of the division of labor in Western political thought.

Deneen was the recipient of the A.P.S.A.’s Leo Strauss Award for Best Dissertation in Political Philosophy in 1995. Prior to joining the faculty at Georgetown he taught from 1997-2005 at Princeton University, where he held the Laurence S. Rockefeller Preceptorship. From 1995-1997 he was Special Assistant and principal Speechwriter for Joseph Duffey, Director of the United States Information Agency. He has presented work and lectured widely, including at such institutions as University of Maryland, University of Virginia, Berry College, University of Chicago, Colby College, Harvard University, Indiana University, Patrick Henry College, Pomona College, Rutgers University, St. Vincent’s College, University of Tulsa, Valparaiso University, and Yale University. In 2006 Deneen became the Founding Director of Georgetown’s The Tocqueville Forum on the Roots of American Democracy, an initiative that seeks to preserve and extend understanding of America’s founding principles and their roots in the Western philosophical and religious traditions.

The talk is open to the public and refreshments will be served.