Prominent Pro-Life Leader to be Honored at Graduation

Christendom College will celebrate Commencement Weekend on May 15-17, 2009, and will honor Reverend Frank Pavone, the national director of Priests for Life, and Dr. Jude Dougherty, Dean Emeritus of The Catholic University of America’s School of Philosophy.

Since its first graduation ceremony in 1980, Christendom College has honored outstanding individuals who have rendered faithful service to our Church and nation, and whose lives can be emulated by the graduates and the college community. This year’s invitees are no different. 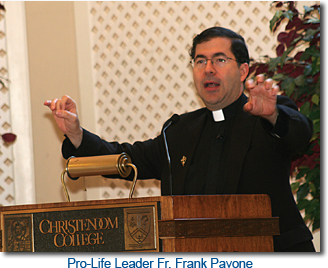 Fr. Pavone is one of the most prominent pro-life leaders in the world. Ordained in 1988, he is a priest of the Amarillo Diocese and serves full-time in pro-life leadership. In 1993 he became National Director of Priests for Life, and he is also the President of the National Pro-life Religious Council, and the National Pastoral Director of Rachel’s Vineyard – the world’s largest ministry of healing after abortion. He has served as an official of the Pontifical Council for the Family at the Vatican, and he received the “Proudly Pro-life Award” by the National Right to Life Committee.

Christendom will honor Fr. Pavone with its Pro Deo et Patria Medal for Distinguished Service to God and Country.

“Over the years, we have had some great Catholic men and women as commencement speakers, particularly, some great pro-life ones. Nellie Gray of the March for Life, Joseph Scheidler of the Pro-Life Action League, Gov. Robert Casey, and Congressman Chris Smith from New Jersey,” says Director of Admissions and Public Relations Tom McFadden. “And we have honored many individuals with honorary doctorates, including Sean Cardinal O’Malley, Archbishop Raymond Burke, George Cardinal Pell, Francis Cardinal Arinze, and Fr. Benedict Groeschel.”

Professor Jude Dougherty will receive an Honorary Doctorate from the College and deliver the Commencement address.

Dougherty is Dean Emeritus and Professor Emeritus at the Catholic University of America School of Philosophy. He has written or edited many books, including Jacques Maritain: An Intellectual Profile and Religion-Gesellschaft-Demokratie: Ausgewählte Aufsätze. He has also written over 100 articles on topics in metaphysics, the philosophy of science, and social and political philosophy in English, Spanish, Italian, German, Swedish, and Polish philosophical journals and collections.

In recent years, a number of Catholic colleges and universities have gotten into hot water with their constituents and the local hierarchy for the people they invited to either deliver the commencement address or receive an award from the institution. Most recently, The University of Notre Dame is receiving a lot of attention for its decision to invite President Barack Obama to be its commencement speaker and to award him with an honorary doctorate. The uproar comes from the fact that President Obama’s policies regarding the sanctity of human life go against the Catholic Church’s teachings on these matter, particularly in respect to embryonic stem cell research and abortion.

According to Notre Dame’s President, Fr. Jenkins: “The invitation to President Obama to be our commencement speaker should not be taken as condoning or endorsing his positions on specific issues regarding the protection of human life, including abortion and embryonic stem cell research.”

“Commencement ceremonies across the country are meant to be times of celebration for the various institutions, and a time to honor individuals from whom we want our graduates to learn and grow as young Catholics entering today’s increasingly secularized society,” says Christendom College President Dr. Timothy O’Donnell. “To think that, as a Catholic college, we could invite someone who promotes policies and values that are contrary to basic human truths that can be known by the natural light of reason and are contrary to the fundamental right to life would be a violation of the noble mission of Catholic higher education.”