Players Amaze Audiences with The Woman in White

The Christendom College Players had the audience in awe as they brought forth laughter, tears, and even goosebumps as they showcased a high calibre of dramatic talent in their production of The Woman in White performed April 3-5. 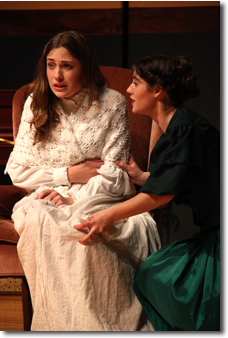 Based on the popular novel by Wilkie Collins, the play was directed by Christendom Alumnus Michael Powell and English Professor Dr. Patrick Keats—a team proving to be a dramatic force in the Northern Virginia drama scene. The Woman in White tells the story of artist Walter Hartright who has an eerie midnight encounter with a ghostly woman dressed all in white. Hartright, engaged as a drawing master to the beautiful Laura Fairlie and her half sister, Marian, tells his pupils about his strange encounter. Determined to learn all they can about the mysterious woman in white, the three find themselves caught in a chilling web of crime, poison, kidnapping, and international intrigue.

Elizabeth Fraser set the stage aglow as the story’s heroine, Marian. Fraser communicated the strength and compassion of Marian’s character in every scene with deep insight and energy. She was matched by Peter Smith who played Walter Hartright. Smith’s veteran experience aided him in expressing a restrained passion for the lovely Laura played by Jacqueline Kenney.

The cast was supported by the icy Countess Fosco, played by Cecilia O’Reilly, and the hapless and humorous Lord Fairlie, played by Chris Foeckler.

“I loved the character of Lord Fairlie,” Freshman Frances Allington said. “The sets were fantastic and the acting was really good.”

“We had 14 actors and there wasn’t a weak part,” Dr. Keats said. “I’m very proud of how strongly and beautifully they performed. These students moved into the theater and had five days to pull it all together—that’s quite a challenge—and they pulled it off splendidly.”

Every year the Christendom Players produce two plays: one in the fall, usually a musical, and one in the spring. And because Christendom does not have a drama department, students from across all disciplines are welcome to audition for the performances.