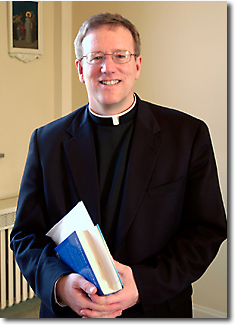 Celebrated speaker on the spiritual life Fr. Robert Barron will deliver a lecture entitled Dialogue between Church and Culture: Moving from Accommodation to Assimilation at Christendom College on Monday, April 20, 2009, at 6:30 p.m.

Fr. Barron, a prominent theologian and podcasting priest, is one of the world’s great and most innovative teachers of Catholicism. His global media ministry called Word on Fire has a simple but revolutionary mission—to evangelize the culture.

He is the Francis Cardinal George Chair of Faith and Culture at University of St. Mary of the Lake/Mundelein Seminary in Mundelein, Illinois, where he has taught Systematic Theology since 1992. Ordained an Archdiocesan priest in Chicago in 1986, he also has published numerous books, essays, and DVDs. He received a Master’s Degree in Philosophy from the Catholic University of America in 1982 and earned his doctorate in Sacred Theology from the Institut Catholique de Paris in 1992.

Fr. Barron lectures extensively in the United States and abroad, including the Pontifical North American College at the Vatican and the Pontifical University of St. Thomas Aquinas in Rome and he is an award-winning author. His numerous books and essays serve as critical educational and inspirational tools for seminarians, priests, parishioners and young people worldwide. His published works are also central to the numerous retreats, workshop and talks that he leads around the country.