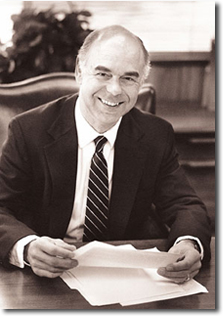 Dr. Thomas Dillon, the president of Thomas Aquinas College, died yesterday, April 15, in a car accident in Ireland. He was attending a conference for the International Council of Universities of St. Thomas Aquinas in Limerick.

Dillon’s wife, Terri, was slightly injured in the accident and remains in the hospital.

Dillon, president of the Catholic college for 18 years, oversaw extensive growth at the college, including a chapel that was dedicated March 7. Our Lady of the Most Holy Trinity Chapel, modeled on a 13th-century Florentine cathedral, was designed to be the physical and spiritual center of the campus. While president, he raised nearly $100 million, which went to financial aid and construction.

“For small schools like Christendom and TAC, the President is a driving force behind everything that goes on,” Christendom’s Director of Admissions Tom McFadden said. “I can only imagine what the faculty, staff, and students are feeling today.”

“Tom Dillon was a good friend, devout Catholic, and a man deeply committed to the authentic renewal of Catholic higher education,” Christendom College President Dr. Timothy O’Donnell said. “Our heart felt condolences go out to his wife, Terri, all the members of his family and the entire community of Thomas Aquinas College. His death is a great loss to us all and a great personal loss to my wife, Cathy, and I as well. He had been a great inspiration to me.”

Dillon is survived by his wife, four children and their spouses, and 15 grandchildren.

Eternal rest grant unto him, O Lord, and let perpetual light shine upon him. May his soul and the souls of all the faithful departed, through the mercy of God, rest in peace. Amen.