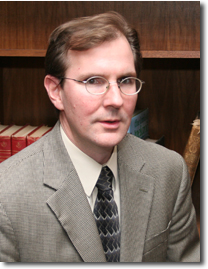 Christendom College History Professor Dr. Christopher Shannon has received a fellowship to attend a summer seminar sponsored by the National Endowment for the Humanities. The seminar will take place from June 2 to July 9 at the Boisi Center for Religion and American Public Life at Boston College.

The theme of the seminar is “Religious Diversity and the Common Good.” Seminar participants will examine the work of leading secular and religious thinkers engaging the issue of the place of religion in an American public order bounded by a constitution that forbids religious establishment, yet protects the free exercise of religion.

Shannon earned his B.A. in English from the University of Rochester in 1985, and his Ph.D., M.Phil, and M.A., all in American Studies, from Yale University. He has been a member of Christendom’s faculty since 2004.

Shannon’s research project, “The Challenge of Guadalupe: Catholic Traditionalism and Liberal Political Culture,” will address the intersection of faith and ethnicity in American political life through an examination of the Catholic symbolism of contemporary Mexican-American identity politics.

“Despite the wide range of meanings attached to Our Lady of Guadalupe by Mexican-American activists, she remains a symbol rooted in a deeply traditional, pre-modern Catholic culture in many ways at odds with the fundamental principles of modern liberal politics,” Shannon says. “Liberal claims to embrace cultural diversity have so far proved unable to accommodate cultures that do not accept individual freedom as the highest value.”

Shannon’s research will analyze the Mexican-American culture as a test case for contemporary liberal ideals. “Will respect for cultural diversity soften secular liberal suspicions of traditional Catholicism? If not, what are the terms by which we limit diversity within our current political system,” Shannon questions.