Christendom College recently announced that it had received a very large bequest, in fact, the largest single bequest in its 31-year history. The $3.75 million bequest came from Mrs. Helen Hasty Perreault, a distant relative and friend of Christendom College founder, Dr. Warren Carroll.

“Mrs. Perreault’s gift is a tremendous help to the College,” says College President Dr. Timothy T. O’Donnell. “It was a mighty helping hand that secures our ability to continue the mission of consecrating the hearts and minds of young men and women to Christ and his Church.” 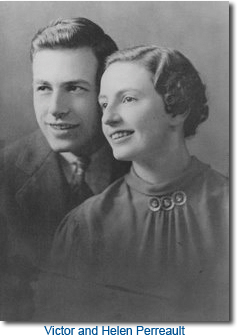 Raised by relatives in Massachusetts, Perreault returned early in life to her native state, Maine, for which “she had a deep love and of whose heritage she was very proud,” according to Warren Carroll.

Her husband, Victor, graduated in 1933 from Carroll’s own high school, Berwick Academy, and served in the United States Navy during the Second World War. He then spent the bulk of his career as a proofreader at a government printing office in Washington, D.C. The couple had no children.

After her husband passed away in 1962, Perreault continued to reside in Arlington, Va., and served for years as an editor at the Bureau of National Affairs and a member of the Maine State Society.

She died in 2007 at age 93 and was buried alongside her husband in Arlington National Cemetery. “Because of Mrs. Perreault’s traditional interest in moral values,” says Dr. Carroll, “she left her estate to Christendom College, to Berwick Academy, and to the Congregationalist Church of New England, of which she was a faithful member.”

Perreault’s gift is well timed and crucially providential for Christendom, which, as with other non-profits, has been challenged by the current recessionary economy.

Although President Barack Obama recently signed the America Recovery and Reinvestment Act (ARRA) for $787 billion, Christendom College will not see a penny of that money. Christendom remains one of 4 accredited colleges – the only Catholic one – in America not to accept any Federal funds. Along with Grove City College, Hillsdale College, and Patrick Henry College, Christendom relies on the generosity and beneficence of alumni and donors for funding.

“Although her bequest quite an extraordinary gift, if we are to be fiscally prudent, we must still implement fiscal controls due to the negative recessionary economic conditions,” says O’Donnell.

Despite being fully-accredited and eligible to receive federal funding, Christendom’s founders and Board of Directors have chosen to neither seek nor accept federal funds.

At this critical time in our country’s history, it seems that the college founders may have made the right decision regarding federal funds,” says Executive Vice President Mark C. McShurely. “We’re seeing that some businesses that have taken federal funds are being told how to operate their businesses, and in some cases, to possibly act against their consciences.”

“Rarely in history has the government funded any business or institution without ultimately controlling it,” writes Kevin Price on his popular financial blog, BizPlusBlog.com. “It is naive to think that a government that exercises so much control over businesses in the form of taxation, regulations, and licensure laws without funding them would not expect more – much more – from companies they actually financed.”

The Commonwealth of Virginia received $4.8 billion of the ARRA funding, with the top five public universities in Virginia receiving a total of $126 million in tax-payer funds. Additionally, they have had to raise their tuition by 5%-7% in order to try and stay in the black.

In contrast, without receiving any of the ARRA funds, Christendom College actually lowered its tuition this year by 1%, to $18,120, in an effort to help its students afford its private liberal arts education and was able to end the year with only a small budgetary shortfall.

“This gift will shore up Christendom College’s endowment fund,” says Vice President for Advancement John F. Ciskanik, ” rebuild operating reserves, fund a strategic project to attract new Christendom supporters, and allow for much-needed repairs. Each of these projects is an important initiative vital to the College’s future.”

“I ask for your prayers for Helen Hasty Perreault, that she may see the beatific vision. Although the majority of our benefactors are Catholic, I am pleased that Mrs. Perreault, who did not share our Catholic faith, saw the value of our education in helping to form virtuous men and women of character and we hope that others will follow her lead and help us to achieve our goal of restoring all things in Christ,” says O’Donnell.