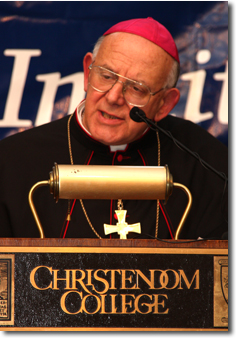 “The phenomenon of cafeteria Catholics is real, widely accepted, and practiced,” Arlington Bishop Paul Loverde told over 200 attendees at Christendom College’s 2-day conference entitled St. Paul: His Spiritual and Scriptural Contributions to the Church held June 26-27. “We hear all the time, ‘I personally believe that abortion is wrong, but why should the Church tell me that my vote should be in accord with my faith’ or ‘Sure, for me marriage is the union of one man and one woman, but we should not impose this belief on others—we should not discriminate—live and let live.’ We hear all of this so often in our society, yet St. Paul clearly tells us that living as cafeteria Catholics is not in accord with being a member of Christ’s body nor does it deepen our spiritual growth.”

The conference welcomed attendees from as far as Seattle, Wash., to hear not only from Bishop Loverde, but sought-after speakers Tim Staples, Mark Shea, and Timothy O’Donnell, as well as theology professors Eric Jenislawski and Sebastian Carnazzo.

Bishop Loverde explained during his Friday evening talk that it was St. Paul’s deep love of Christ and the Church, as well as his hope, that fueled his evangelical mission. Paul claimed to be a slave of Christ and this Christian slavery is no cringing and abject subjection. To be the slave of Christ is the way to perfect freedom, he said.

Holding advanced degrees in both history and theology, O’Donnell explained that Paul had an ardent desire, as Apostle to the Gentiles, to visit Rome. In the Acts of the Apostles, God in fact guides Paul away from the east and to Rome.

“St. Paul’s trip to Macedonia was like a spiritual D-Day,” O’Donnell said. “This begins the whole movement of the preaching of the Gospel in a westward direction.”

O’Donnell said that we can learn much from St. Paul by examining not only the great risks he took in traveling to spread the Gospel as witnessed in Acts, but also the deep love of Christ that he displayed in his epistles.

Popular apologist and author of Nuts & Bolts: A Practical Guide for Explaining and Defending the Catholic Faith, Tim Staples delivered an address on St. Paul and justification. Staples highlighted the importance of context when reading Scripture. A lack of context can produce bad theology, he said.

“Folks, context! Tradition brings to us a context out of which the Scriptures arise and have their meaning, so that we can understand the words of Scripture. And of course, the Magisterium. We have Sacred Scripture as a gift from God through his Church and we have the Tradition and the Magisterium that interprets both,” he said.

Staples said that in the writings of St. Paul, he makes it very clear that not only is salvation a process, but justification is as well. “In Romans 5:1, justification is seen in the past tense, but do we have St. Paul talking about justification as future and contingent? Absolutely. And in multiple places.”

He explained that by looking at the context you can see that when St. Paul speaks about justification in the past tense he is referring to baptism and not to a person’s ultimate justification.

“There is no such thing as ‘no matter what you do sister, you’re going straight to heaven.’ My friends, our theology should order us toward holiness and not be a source that the devil can play with and lead us in the other direction. Catholics, you got a wonderful theology and a fullness of the faith. It is a tremendous gift. Please, please, as one who did not have it and now enjoys it, please give it away,” he closed.

Following Staples’ address Bishop Loverde offered Mass and delivered the homily. “There is a fundamental two-fold dynamic underlying our identity and mission as those who belong unconditionally to God in Christ Jesus and to his Church. This twofold dynamic is to be with the Lord Jesus and to be sent out in his name to proclaim the Gospel,” he said.

Loverde explained that St. Paul embodied this two-fold dynamic and encouraged all to learn from and imitate him in daily life.

“Modern methods of interpretation often yield results that either cannot be reconciled to the Catholic faith or are spiritually sterile, not so much heterodox, but useless for preaching, spiritual meditation, or theology,” he said. “Biblical studies today could be described as ‘Christianity as reconstructed by a post-Christian generation of archeologists.'”

In the next talk, Sebastian Carnazzo, a professor of theology at Our Lady of Guadalupe Seminary, explained that it was essential to read the Acts of the Apostles in order to understand the epistles of St. Paul.

Convert and author of many books, including By What Authority?: An Evangelical Discovers Catholic Tradition, Mark Shea brought the conference to a close examining St. Paul and his influence on evangelization and apologetics.

“When it comes to evangelism there is one commandment of Christ that all Christians are ready and eager to obey: Mark 1:44, ‘Go and tell no one.'”Shea quipped.

Shea explained that there are two popular schools of evangelizing: one which tells you to shout on the street corner, and the other that says, simply live your faith, also known as lifestyle evangelizing. Shea proposed that you had to do both.

Shea petitioned all to imitate Paul in his missionary fervor. “Paul was successful because he did what he was commissioned to do, and God does not command us to do something and then not give us the power to do it.”

All of the above talks can be ordered by contacting National Media Services at 540-635-4181 or mike@nationalmediaservices.com.