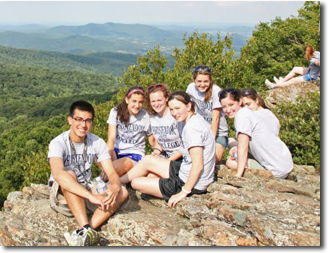 Christendom College held two different summer programs for high school aged students over the summer – both of which were a resounding success. The college held three sessions of its every-popular “Experience Christendom” Summer Program and two sessions of the newly created Latin Immersion Program, attracting over 125 students to its campus and giving them an opportunity to experience the unique educational opportunities offered by Christendom.

When Laura McGrath of Elk Grove, Calif., boarded her plane to Virginia, she was not excited about spending a week at the “Experience Christendom” Summer Program, but she was surprised by what she found.

“I was a little worried about some of the rules, and thought that perhaps things might be a little more boring than exciting at the program,” McGrath said. “However, those thoughts were quickly reversed.” The program, which brought 103 students from across the United States, Canada, and Ireland to the Shenandoah Valley, was held in three different sessions.

“The program was packed full of incredibly fun and seemingly never-ending activities, and are filled with and led by amazing people,” McGrath said. “By the end of the camp I was sure that I had experienced the best camp ever, and I could not wait to come back and experience more.”

McGrath was so excited about coming back to campus that she actually decided to forgo her senior year and she is now a member of this year’s freshman class.

Taught by Christendom’s own faculty, students spent each morning taking classes in philosophy, literature, history, and theology. Mass, rosary, and Benediction were also part of the daily schedule.

“The intimate relationship between teachers, students, priests, and staff surprised me,” said William Hegedusich of Helotes, Texas. “Teachers ate lunch with students, went on hikes, and played sports with us. Even in the short amount of time we spent there, the teachers learned our names, and came to know some of us fairly well.”

The Latin Immersion Program, now finished its second year, was offered in two different one-week sessions this summer, and according to Linnea McLaughlin of Los Angeles, Calif., “It was the kind of thing you dream about.”

“The ability to come together with a bunch of Latin speakers in one place is something you don’t expect to find in 21st century America,” McLaughlin said. “It was an experience that not only improved our Latin, but also built new relationships, strengthened our faith, and increased our knowledge.”

“The teachers were phenomenal,” McLaughlin said. “They had a true understanding of students and the way they learn, and helped us find joy in learning through the interactive, humorous way they taught.”

Participants in both programs were able to do more than take classes. They were able to take advantage of the college’s beautiful scenic location and spend time on the Shenandoah River, in the Blue Ridge Mountains, and enjoy time spent with members of the faculty and staff at their homes.

“These programs routinely change lives,” Director of Admissions Tom McFadden said. “Sometimes just a week of authentic Catholic classes and culture is enough to show students that there is a better way of life out there than what our current culture offers.”

Jonah Selner of Burnsville, Minn., was glad to see that there were other people his age who were serious about their faith who also had “vibrant personalities.”

“The camp encouraged me in my spiritual life, to go above and beyond what I normally would have done,” Selner said.

“One of the best ways to determine if a college is right for you is to visit,” says McFadden. “And spending an entire week living the life of a Christendom College student is very eye-opening for our program participants each year. Year after year, we hear back from the students who say that their time spent on campus was the best time of their lives. It’s so great being involved in such extraordinary programs that change lives forever.”

Peter Deucher of Vass, NC, appreciated receiving a lot of personalized attention during the Latin program. The classes were often divided into smaller groups, to accommodate the different levels of proficiency among the students. “At the beginning of the week they blew us away with Latin, but by the second day they started to break it down and make sure we understood. The teachers were fantastic,” he said.

Participation in the program grew 50 percent from last year and further growth is expected next year.

“There’s a lot of interest out there and what we’re doing here at Christendom with Latin is totally unique,” said Program Director Dr. Mark Clark. “Go anywhere in the world to learn a language and it will be taught by total immersion. There is no doubt that our students went away with new understanding of Latin and a new found desire to write, speak, and read it at working speeds.”

Elizabeth Del Curto of Oakdale, Calif., was surprised at how much Latin she was able to understand. “Now, when I’m driving down the street, I’m able to think in Latin about common surroundings. I feel that I now have a stronger foundation in the language. This program helped me understand the importance of thinking in Latin rather than translating Latin into English.”

“These students will have a huge head start in Latin, if they come to Christendom—and quite a few of them do,” Clark said. “This taste of Christendom’s strong Classics program, fun social life, and vibrant spirituality is quite attractive to today’s Catholic youth.”

Dates for next summer’s programs have not been established at this time, but plans are underway to have four one-week “Experience Christendom” Summer Program sessions and two one-week Latin Immersion Program sessions. Special discounts will be offered to students wishing to return to the Latin Program next summer and financial assistance will be available to current high school juniors interested in attending any of the “Experience Christendom” sessions. To learn more about the program, click here.