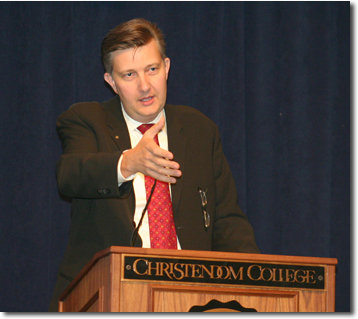 Entrepreneur and former Swiss Guard Andreas Widmer delivered a talk entitled “Seven Things I Learned from Pope John Paul II on Being a Catholic Business Person” to students and faculty at Christendom College on October 5.

In his address, Widmer related anecdotes from his experiences with Pope John Paul II to illustrate seven lessons: live a life based on Faith and prayer; plan for the future, but live in the present; give yourself completely to your vocation; use your position to be a public moral compass; enjoy life; be humble; and have dignity.

“John Paul’s actions are not just interesting from a religious perspective,” Widmer said, “His advice could compete very well with all these Fortune 100 CEOs that are writing business advice.”

Widmer said that it is common for business people to read the latest book about a successful CEO leading a Fortune 100 company with a only few hundred people. Pope John Paul II, as the head of the Church, successfully ran an organization much larger than any of those.

He further highlighted the importance of having a prayer life when working in the business world. “Have your basis in prayer,” he said. “Go to daily Mass to gain strength and inner peace. Make prayer the center of your life and then evangelize others in an appealing way.”

He also told students that self sacrifice for one’s vocation was the embodiment of John Paul’s pontificate. “Recognize your work as a vocation, your mission from God,” he urged students. “If you go out into the work force—and at some point you take stock—and your work is not building you up, your work is not making you be more, then stop, reevaluate, and pray to find out what it really is that God wants you to do.”

Widmer, a seasoned business executive with experience in high-tech and international business strategy consulting said that Christendom College is a great and fertile ground for business entrepreneurs.

“Any industry knowledge I can teach you, what I cannot teach you is your character,” he said. “And what they are forming here is your character, they are teaching you to think, how does one approach a problem. It doesn’t matter what the problem is, the problems all end up being the same. If you have, what I would call, a pattern recognition of how to find the Truth, then I would love to hire you.”

Widmer served as a Pontifical Swiss Guard from 1986-1988, protecting Pope John Paul II. He is a co-founder of the SEVEN Fund, a non-profit organization that seeks to encourage entrepreneurship in impoverished regions of the world. Holding numerous degrees from Switzerland and the US, Widmer is also an author who recently contributed two chapters to the book In the River They Swim: Essays from Around the World on Enterprise Solutions to Poverty. He has written articles featured in various business and general interest media including the Financial Times, Bloomberg News, Sky TV, and Catholic Digest.

Many students flocked to the reception held in the Chapel Crypt following the talk and enjoyed asking Widmer questions about entering the business world and starting companies of their own.

His talk can be heard at Christendom on iTunes U: www.christendom.edu/itunesu.