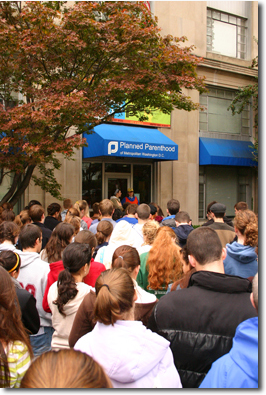 Christendom College’s pro-life student group, Shield of Roses, held its biggest protest in over 30 years of existence. On October 31, over 200 students, faculty, staff, and visitors traveled to Washington, D.C., to peacefully protest their opposition to abortion at the Planned Parenthood clinic, located just north of the White House, on 16th Street.

The group protests at this same clinic each Saturday morning during the academic year, but normally only around 20-30 students make the trek into D.C. on a weekly basis. Once a semester, the group’s leadership organizes what it calls a “Mega Shield” event and encourages as many of the members of the College community to participate. Last year, Mega Shield events drew as many as 125 students, and prior years’ record up to 150 participants.

“All of the members of our college community are, of course, pro-life,” says Shield of Roses President Paul Wilson, who will be graduating this May, “but getting college students to give up their Saturday mornings to drive 75 miles to Washington to pray four rosaries and a Divine Mercy Chaplet and to drive another 75 miles back to campus all before lunch is a lot to expect – even for Christendom students. But once a semester, when we organize Mega Shield, the members of our community really get fired up.”

According to a woman identifying herself as Professor Foxy, writing for an online blog on feministing.com, Christendom College students are really making an impression on those who work at the abortion clinic and are changing the face of “anti-choice” America.

In her article, entitled, “Thank you Dr. Tiller,” Professor Foxy, who says that she works as a pro-choice clinic escort at the Planned Parenthood clinic where the Shield of Roses group prays, writes: “Over the years, the antis [anti-abortion protesters] have stayed the same and they have changed. When I started, almost all the antis were 45 plus, white, male and slightly disheveled. These antis still exist, but they are now joined by the younger antis. Some of these younger antis are hip, especially the Bound for Life crowd. We also have many, many students who come from local colleges, the most prominent being Christendom College. They drive in from Front Royal, VA every Saturday morning (leaving in time for Saturday brunch) to stand outside the local Planned Parenthood. Most of them pray (ending each Saturday with a rousing Viva!), but a few of them approach the patients. Nervously approaching the women entering the clinic, the Christendom kids tentatively say ‘we can help you save your baby. Each baby is a blessing from God.'”

“It really makes you think,” says Admissions Director Tom McFadden who attended the October 31 Mega Shield. “I’ve been to the annual March for Life in D.C. probably over 20 times and it’s hard to tell what effect it has on saving the lives of unborn babies. But this past Saturday, being there, kneeling on the grass in front of the abortion clinic, made a difference. Through the grace of God and our physical presence, we ended up saving the lives of two babies because their mothers chose not to enter the clinic that day. It doesn’t really get much better than that!”

Shield of Roses has been protesting at this particular Planned Parenthood clinic for the past ten years, and over the past five years, members of the pro-life group have built relationships with some of the pro-choice clinic escorts, even offering some of their rosaries for these same clinic escorts. And whichever of the other many clinic escorts Professor Foxy is, she is obviously affected by the Christendom students.

The Shield of Roses receives limited funds from the College’s Student Activities Council but relies on the generosity of others to continue its work. Anyone interested in making financial contributions to this student group should contact Paul Wilson at pwilson@christendom.edu.