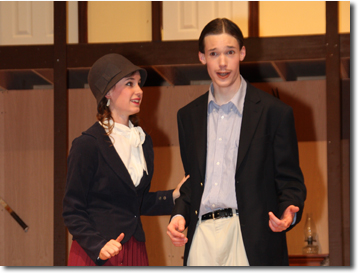 The Christendom Players brought the stage to life with their performance of the hilarious mystery, “Seven Keys to Baldpate,” on November 20-22 at the Warren County High School Auditorium.

In “Seven Keys,” Senior Kyle Kelly played William Magee, an author of popular adventure novels, who bets $5,000 that he can write a novel in 24 hours. Retreating to the Baldpate Inn to write the novel, he soon finds himself surrounded by gangsters, femme fatales, and a myriad of other characters all eager to get their hands on a fortune locked away in the hotel safe.

Stage veteran Mary Harrington, now a junior at Christendom, gave a stellar performance as the vindictive Myra Thornhill. In an action-filled sequence, Thornhill was shot and killed by the gangster Max, played by Sophomore Chris Foeckler, who convincingly portrayed his character’s guilt.

The audience also enjoyed the comedic performances of Junior Steve Curtin who played a misogynistic hermit, and Senior Nathan Gniewek, who played Chief of Police Roberts.

“Seven Keys,” written by the legendary playwright and songwriter George M. Cohan, was the ninth production that Director Mike Powell and Producer/Assistant Director Patrick Keats have collaborated on.

“We were very pleased with our cast.” Keats said, “and the set was marvelous. It was a two-level set for this play—a first, I believe, for Christendom. The set came together thanks to the efforts of Cyrus Artz.”

Artz, a senior at Christendom, was one of the lead characters in the play, but unfortunately became sick the performance weekend. Powell, the principal director, managed to take Cyrus’s place in the role of Mayor Cargan and gave an impressive performance.

“They did a fabulous job,” Sophomore Liz Sartor said. “Their talent is amazing not only in acting, but also in the behind the scenes—the set, the makeup, the hair, and the costumes.”