College Closes to Protest Abortion at March for Life 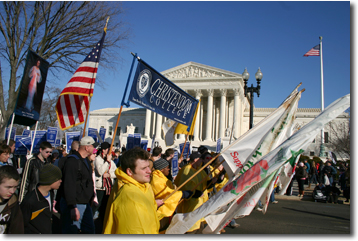 Christendom College will close its doors on Friday, January 22 and its Student Activities Council will charter busses enabling the entire student body to attend the 2010 March for Life in Washington D.C.

“This is one of my favorite things about Christendom,” says Cyrus Artz, a senior and President of Students for Life. “This college recognizes our responsibility to the unborn and enables the entire College community to participate each year in one of the most important witnesses to the value of human life.”

Artz also cites this as an example of how the College does not merely voice its Catholic values, but lives them.

“Every step taken and prayer offered by our students at the March, is a testament to the education and formation we receive here,” he says.

“This closing coupled with the enthusiasm of our students shows Christendom’s unwavering commitment to life,” Dean of Student Life Jesse Dorman says. “All our students are given the opportunity and the means to give public witness to the importance of life at our nation’s capital.”

Sophomore Angela Swagler is one of those enthusiastic students excited about the opportunity to defend life.

“It’s so wonderful that at Christendom College we really are Catholics first,” she says. “It’s how it should be. We cannot just let our faith be stated, rather, it has to be genuine and to be genuine, we need to actively stand for what we believe.”

Swagler says she feels that it is an honor to be part of a community that witnesses “against the grave evil of abortion.”

Every year, Christendom cancels classes on the anniversary of the Roe v. Wade decision that legalized abortion on demand in the United States, and the College’s entire student body enthusiastically attends the March. Last year, Christendom students led the March for Life, carrying the lead banner and flags.

The theme of this year’s March is “Stand Up Now! Unite for the Life Principles—No Exception! No Compromise.” The “life principles” refer to a comprehensive statement of the position motivating the pro-life movement and serve as the basis for pro-life moral and legal theory by which the American people can overturn Roe v. Wade.

Founded over 30 years ago Christendom College has attended the March for Life as a community every year. Its students are active in pro-life work year round, leading prayerful protests at a Planned Parenthood Clinic in Washington once a week, as well as taking part in sidewalk counseling and other pro-life activities.