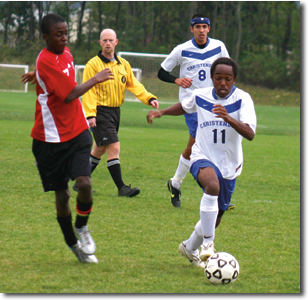 It might have been the fact that 32 men arrived on campus a week early for three-a-day practices only to have the team whittled down to 23; or it might have been the fact that the team was made up of 10 freshmen, five of which would be regular starters; or maybe it was that this team didn’t lose one player from last year’s team, whose record was 6-1-1. All these things and more could have given Coach Vander Woude a glimpse into what would be a great season.

“This year’s team was a great group of guys that enjoyed being together and especially loved to play soccer, and it showed in how we played as a team throughout the year,” he says.

Despite the mostly young talent, the team will say goodbye to two key seniors, Ryan Doughty and JP Minick, both of whom were starters during their time here at Christendom; Ryan for all four years and JP for three. Both of these men exemplified what is meant by the phrase “play your hardest,” whether it was JP’s physical and aggressive style of playing unstoppable defense, or Ryan’s tireless work ethic on the practice field or in the game that netted him many goals from pure perseverance and hustle. Ryan graduates after being the team captain for the last two years and the team will miss his leadership and always-positive attitude on the field.

The season concludes with many highlights for the team, the first being the game played at Bryn Athyn College near Philadelphia, PA, early in the season. As it rained all day and throughout the game, the Crusaders found themselves behind 0-1 at halftime. But the team persevered, as it would throughout the season. The Crusaders rallied to tie the game 1-1 and then, with eight minutes left, sophomore Joe Stephens scored the game-winning goal. Other high points of the season include a come-from-behind win against Division III Mt. Aloysius, and a win over Lord Fairfax Community College in which sophomore Ted Cantu scored the game winning goal with just over 3 minutes left. The team finished the season with a win over Patrick Henry College in the championship game of the Shenandoah Chesapeake Conference tournament and finished ranked #15 in the national USCAA conference.

Coach Vander Woude was especially happy with the way the team played together and passed the ball throughout the year, saying, “we took huge strides this year toward playing a fun style of soccer, of playing soccer the way it is to be played, as a team.”

This was very evident throughout the year as the Crusaders dominated in time of possession during all but two of their games. With a team of talented individuals, another sign of their unselfish play was that 10 players registered at least one goal during the year, and of the 10, four players had 4 goals or more. Leading the team in goals this year were sophomore Peter McNeely and freshman Anthony Readings. Joe Stephens and newcomers Tommy Salmon and Nicholas Blank led the team in assists. But perhaps the best thing about this season is that in only graduating two seniors, the success will hopefully continue next season!