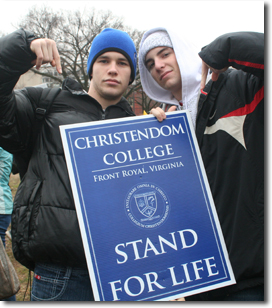 On January 22, Christendom College transported over 400 students, faculty, and staff to the 37th March for Life in Washington D.C. Braving the cold weather, the college community rallied on the Mall facing Capitol Hill with an estimated 300,000 fellow pro-lifers.

“The March was extremely hopeful and joyful despite the hard times we are facing,” Junior Ania Zganiacz of Connecticut said. “It’s wonderful how Christendom supports the March by making it so easy for students to attend—it really is an essential way for the Christendom community to stand up for the culture of life.”

Christendom College routinely cancels classes on the day of the March, and the Student Activities Council charters the many buses. Students begin the day with Mass and pray the four different mysteries of the rosary en route to and during the March—making the event a time for both political and spiritual action.

“I am very thankful that I and my fellow students were given the opportunity by Christendom to join those unsung heroes and reaffirm our commitment to establishing a culture of life,” said Cyrus Artz a senior from North Dakota and president of Students for Life. “It was also very inspiring to come across many Christendom alumni at the March who showed that the lessons they learned at Christendom were being lived and not forgotten or discarded.” 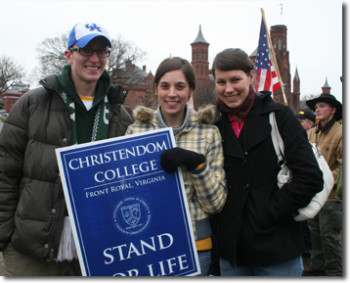 Anna Adams, a junior from Indiana, appreciated how easy it was for her to attend the March as well.

“I think it was fantastic that Christendom was able to provide its students with the opportunity to show our support,” she said “It serves as a great witness to the world that the ongoing controversy over abortion cannot and will not be ignored through indifference or ignorance.”

Adams found the enthusiasm of her fellow marchers bolstered and encouraged her own convictions concerning the issue of abortion.

Sophomore Joseph Stephens of Wisconsin was also deeply moved by the March. Christendom’s presence there communicated the importance of sacrifice in saving human life, he said.

“Even though there are no classes, it is not a free day. It is a sacrifice to be in a massive crowd and stand or walk all day in the cold,” Stephens said. “As a community, Christendom truly lives up to its motto of ‘restoring all things in Christ.’ Together, all faculty, staff, and students bore witness to the culture of life.”

Christendom College students are active in pro-life efforts at other times throughout the year as well, most notably each Saturday morning as many of them travel to Washington, D.C., to protest outside a Planned Parenthood clinic. Other students take part in pro-life activism through the Students for Life groups while others help out with the College’s outreach program and work with the local crisis pregnancy center.

Watch a video from the event: