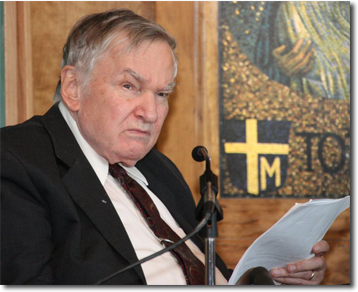 Christendom College’s Founding President Dr. Warren Carroll will deliver a lecture on Monday, February 22 at 4 p.m. entitled “Catholic Resistance to Communism in Lithuania.” The lecture is open to the public and will be held in the crypt of the college’s Christ the King Chapel.

A convert to Christianity, Carroll was educated at Bates College and received a Doctorate of History from Columbia University. After founding Christendom College, he served as the College’s president until 1985 and then as the chairman of its History Department until his retirement in 2002. He is the author of numerous historical works including The Rise and Fall of the Communist Revolution, The Guillotine and the Cross, and his major multi-volume work The History of Christendom.

Future talks in this series of historical lectures by Carroll will be held on March 29 and April 26. Lecture topics to be announced. For more information contact Niall O’Donnell at nodonnell@chritendom.edu.