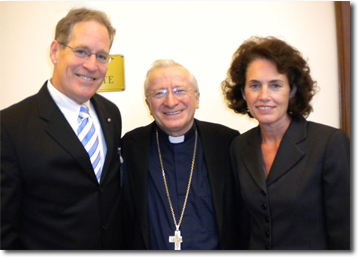 O’Donnell and his wife, Cathy, with Pontifical Council for the Family President Cardinal Ennio Antonelli.

On February 8-10, Christendom College President Dr. Timothy O’Donnell participated in the 18th Plenary Assembly of the Pontifical Council for the Family as an official consultor. The theme of the assembly was “The Rights of Childhood,” chosen with reference to the 20th anniversary of the U.N. Convention on the Rights of the Child.

Cardinals, bishops, and scholars convened to discuss a wide range of topics, such as “challenges facing Catholic non-governmental organizations in the UN” and “the adoption of children by homosexual couples.”

“It was a great honor to be involved in the recent gathering of the Pontifical Council for the Family,” O’Donnell said. “It was a special joy to gather together around the successor of Peter and reflect upon the rights of the child within the context of the family.”

O’Donnell, who was first appointed to the Pontifical Council of the Family by Pope John Paul II and then recently re-appointed by Pope Benedict XVI, noted that the catholicity of the Church was manifested in the geographical diversity of the participants, who came from Europe, Africa, Asia, Oceania, and Latin America.

“We even met a delightful couple from Galilee,” he said. O’Donnell also connected with friends of Christendom College, including George Cardinal Pell of Australia and Boston’s Seán Cardinal O’Malley, who serve on the Council as well.

O’Donnell with George Cardinal Pell who presided over Christendom’s 2006 Commencement Exercises and received an Honorary Doctorate of Humane Letters.

During the assembly, the Council proposed the creation of a vade mecum or guide for marriage preparation to Pope Benedict XVI. The Pontiff called this project an “important task” and in an address to the Assembly, defined three stages in marriage preparation: remote (youth), proximate (engagement), and immediate (the final steps before marriage).

“This catechesis is so important,” O’Donnell said, “particularly given the brutal secularization of our world with the concomitant loss of a clear understanding of the nature, purpose, and ends of marriage. The loss of faith in our modern world has made this a very crucial work indeed. I look forward to participating in this work entrusted to the Pontifical Council by Pope Benedict XVI.”

As a consultor to the Council, O’Donnell will be involved in the creation of the vade mecum, reviewing its contents and making suggestions before it is officially published.

The Pontifical Council for the Family is responsible for the promotion of the pastoral ministry and apostolate to the family, through the application of the teachings and guidelines of the ecclesiastical Magisterium, to help Christian families fulfill their educational and apostolic mission.

For more information about the Council visit vatican.va.

Read the Pope’s address to the Council here.