“As I began my study, I quickly realized that the Irish were the most represented ethnic group in American film, yet the least represented in film scholarship,” Shannon says. 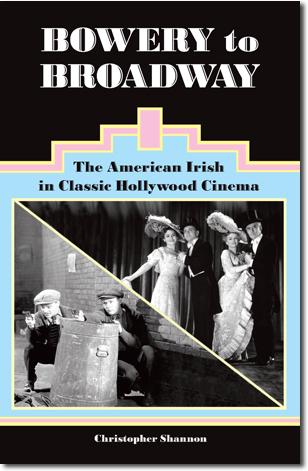 Talk of the Irish in the Golden Age of Hollywood inevitably calls to mind images of John Wayne and Maureen O’Hara in John Ford’s classic 1952 film,The Quiet Man. Professor Shannon’s book examines a different side of the Irish in Hollywood—the urban, Irish-American films that represented Irish during the 1930s and 1940s.

In 1931, James Cagney’s portrayal of the urban Irish-American gangster Tom Powers in The Public Enemy set the gold standard for the Hollywood gangster, yet also helped to launch a golden age of Irish-American cinema. Irish gangsters shared the screen with a broad range of urban Irish characters, such as boxers, working girls, priests and entertainers.

Films such as Angels with Dirty Faces, Gentleman Jim, Kitty Foyle, Going My Way, and Yankee Doodle Dandy presented the American Irish as inhabitants of an urban village, at once traditional and modern, Irish and American.

“Irish stories that expressed doubts about the American dream clearly struck a chord with Americans who saw that dream collapsing all around them during the Great Depression,” Shannon says.

The Depression caused many to rethink the American dream and these films offered an alternative social vision that prized communal solidarity over individual advancement, local loyalty against the rootless freedom of the frontier.

Against both the nationalizing trends of the New Deal and the rising nostalgia for the rural American past, these films affirmed the reality of community in the urban present. Drinking and fighting, loving and hating, playing and praying—through it all, the Irish remained local heroes.

Christopher Shannon completed his graduate work at Yale University and his undergraduate at the University of Rochester. He has written numerous articles, reviews, and essays as well as two other books,Conspicuous Criticism: Tradition, the Individual, and Culture in Modern American Social Thought and A World Made Safe for Differences: Cold War Intellectuals and the Politics of Identity.

Bowery to Broadway: The American Irish in Classic Hollywood Cinemacan be purchased online at amazon.com or borders.com.

Read the book’s review in The Wall Street Journal.

This story also appears in the Arlington Catholic Herald.