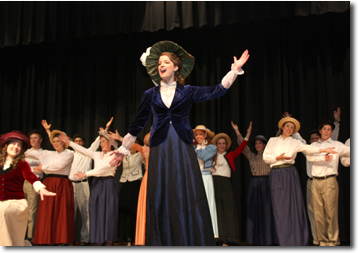 The Christendom College Players filled the Skyline High School Auditorium with music, color, and laughter with their performance ofHello, Dolly! on April 16-18.

Hello, Dolly!, based on Thornton Wilder’s The Matchmaker, features music and lyrics by Jerry Herman. The play tells the story of a matchmaker named Dolly Levi who takes a trip to Yonkers, New York, to see the “well-known unmarried half-a-millionaire,” Horace Vandergelder. While there, she convinces him and his clerks to go to New York City. In New York, she goes on a matchmaking spree with his friends—saving Vandergelder for herself.

Featuring a 40-member cast, Hello, Dolly! was the biggest show the Players have put on. Sophomore Meghan Kelly, as Dolly, led the players with her charm, great acting, and beautiful voice. Kelly was well-supported with the vocal talents of Senior Cyrus Artz, who played Cornelius Hackl, and Sophomore Jacqueline Kenney, who played Irene Molloy.

“It was great to see everyone pull together to make it happen,” Artz said. “Everyone had to take on tasks beyond just learning lines and dance steps. It gave us an opportunity to truly learn theater in a hands-on environment and not in a clinical, commercial environment like you’d find at larger schools.”

Artz sang the praises of Director Mike Powell, who he describes as having a real vision for the show and a gift for getting that across to his actors.

“We’re also extremely blessed in our producer, Dr. Keats, who works harder than any of us and has years of experience in both the acting and technical aspects of the stage,” Artz said. “Without both of them, we would have had a very difficult time harnessing the talent on campus into creating a professional, enjoyable experience for our audiences.”

Meghan Kelly noted that the show had a great impact on not only the audience, but the cast and crew as well. “Hello, Dolly! is all about bringing people to life,” she said. “Just as Dolly brings people to life through helping them embrace a wonder and beauty in the world which they hadn’t recognized before. And this is exactly what it did for us as a cast—it brought us together creating such an awesome show.”

Sophomore Katie Gutschke performed in the chorus and said that it was her first time being on stage since grammar school. “It was a lot of fun,” she said. “There was so much energy and enthusiasm. And there were also a lot of practices and late nights, but it was worth it. Everyone loved it. They told us how awesome it was and how much they enjoyed it.”