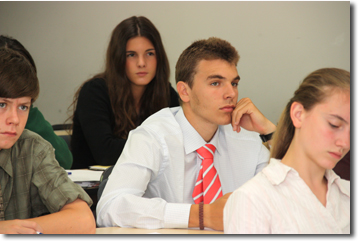 Christendom’s admissions office will be offering four one-week sessions of its ever popular “Experience Christendom” Summer Program for current high school juniors during the months of June and July.

Sure to attract some of the brightest and best students in the nation, these programs are designed to give students an introduction into Christendom’s rigorous academic program, as well as to let them experience what life would be like as a student on campus.

After hearing all about Christendom from an older sister who had attended the “Experience Christendom” Summer Program in 2008, Sarah Landry had developed a view of what she thought Christendom College was. To her, it was an authentically Catholic college; it had six majors; it had a dress code; it didn’t have Mom’s cooking; and it was small. And since she and her sister had vastly different tastes, she determined that Christendom was simply not her type of college.

But that all changed during her own visit to campus during the 2009 “Experience Christendom” Summer Program.

Shortly after her arrival on campus, the student counselors led the group on a tour of the campus. “I remember the first time we went into the chapel,” Landry recalls. “One of our counselors explained to us that the chapel was placed in the center of the campus to symbolize ‘how God is, or at least should be, in the center of our lives.’ It was then that my eyes first began to open and see what a Catholic culture really is.”

During the course of the week, the program participants attended daily Mass alongside the counselors and professors.

“Their example was inspiring! Our counselors, in particular, impressed me. They were willing to share their faith and personal stories,” she said, “lend a hand and give advice, while always making sure we had fun. Acting as role models, they showed us what it means to truly live in a Catholic culture.”

This Catholic culture extended to the classroom, too, she said. All of the professors explained their classes’ purpose in relation to their earthly and spiritual lives. History Professor Brendan McGuire emphasized in his history class the importance of knowing the Church’s past and the teachings of the Catholic faith. College President Timothy O’Donnell’s theology class made them dive deeper and realize truths about the Catholic Faith about which they were either ignorant or they had simply taken for granted.Philosophy Professor John Cuddeback’s class was revolutionary to the majority of the students. They were asked seemingly simple questions, but soon discovered their complexity cloaked by simply written words. They were questions that really made them think and ask more questions. He taught them what philosophy really is, rather than just making them study philosophers of the past. In Mrs. Hickson’s literature class, she taught them the significance of literature, its relation to philosophy and history, and the benefits of a liberal arts education.

“The summer program helped me to realize that Christendom is a lot more than a small school with only a small number of majors,” says Landry. “It is a place to discover what really matters in life. I am still unsure what career God is calling me to, but I want to construct a strong foundation upon which I can build a faith-filled life. With a first-rate Catholic liberal arts education I believe I will be able to better serve my Lord and become who He wants me to be.”

The students take four classes during their week-long session: Moral Imagination in Literature, Faith and Reason, Ethics, and The West and Christianity. These classes in English, Theology, Philosophy, and History are taught by Christendom’s faculty who will spend time with the students both in and out of the classroom.

Each day, the students have the opportunity to attend Mass, confession, Eucharistic adoration, and pray the rosary as a group. In the afternoons and evenings, students will take part in a variety of fun social activities, including dances, hikes, canoe trips, sing-a-longs, bowling, sports, and a talent show.

“We have been receiving a steady stream of registrations for these exciting programs,” says Program Coordinator Beth Fettes. “Since we are only accepting 30-40 students per session, it is quite possible that we will end up with a waiting list this summer. Register soon!”

Although each session is reasonably priced at $500, there are still some students who would greatly benefit from this program but, unfortunately, are unable to afford it. Thanks to the generosity of a number of Christendom’s committed donors, the admissions office can offer some financial assistance to those who request it, therefore, enabling everyone to be able to take advantage of this life-changing program. Please contact the admissions office to either donate money to this Summer Program Fund or to request funds from it.