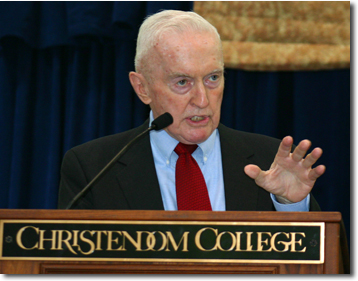 “God is not dead. He isn’t even tired,” quipped Dr. Charles E. Rice in his address to the 94 graduates at Christendom College’s commencement exercises on Saturday, May 15. Rice, a former law professor, Catholic apologist, and author of several books, was awarded an Honorary Doctorate in Humane Letters during the ceremony. His address warned graduates of the great challenges they will face, but told them that they were on the “winning side.”

A Professor Emeritus at the University of Notre Dame, Rice used the current health care bill as an example of the threatening transformation of society and government. He called the current government “a one-party regime, the leader of which was elected with 54 percent of the Catholic vote” and said that it was changing America’s free economy and limited government into “a centralized command system of potentially unlimited jurisdiction and power.”

“[The government’s] takeover of health care, against the manifest will of the people, not only funds elective abortions and endangers the elderly and conscience rights—it was enacted in disregard of legislative process and by a level of bribery, coercion, and deception that was as open as it was unprecedented,” Rice said.

Rice compared the health care bill to Germany’s Enabling Act of 1933, which ceded full and irrevocable powers to Hitler.

“The Enabling Act received the needed two-thirds vote only because it was supported by the Catholic party, the Centre Party,” Rice said. “Our ‘Health Care Reform,’ enacted with the decisive support of Catholic members of both houses of Congress, may be the Enabling Act of our time in the control it cedes to government over the lives of the people.”

An advisor to Christendom’s Board of Directors, Rice warned the graduates of three lies of the modern world. The first is secularism, or that there is no God or He is unknowable.

“The existence of God is not self-evident,” Rice said, “but it is unreasonable, even stupid, not to believe in God, an eternal being that had no beginning and always existed.”

The second lie is relativism, which Rice said is absurd, pointing out that the very statement “all things are relative” itself must be relative.

The third lie is individualism, which Rice held to be the origin of the so-called “pro-choice movement” as we know it today. Individualism claims that each person is an autonomous, isolated individual with no relation to others unless he consents to that relation.

“Planned Parenthood didn’t think it up,” Rice said. “The mother has no relation to her unborn child unless she consents. The husband and wife have no continuing relation unless they continue to consent, and so on. The autonomous individual is his own god.”

Rice admonished students to trust God despite the challenging times. “And pray, especially, to Mary, His Mother and ours,” he said. “At Lepanto in 1571, the odds against the Christian fleet were so great that Las Vegas would have taken that bet off the board. But they prayed the Rosary and Mary gave the victory.”

President of Human Life International, Rev. Thomas Euteneuer, delivered the homily at the Baccalaureate Mass on Friday, May 14, and was awarded Christendom’s Pro Deo et Patria Medal for Distinguished Service to God and Country during the commencement exercises on Saturday.

“If you are a graduate of Christendom College you will be called to some form of martyrdom for the sake of the Gospel—the Gospel message that transforms our society—and it is a message that they will not want to hear,”Rev. Euteneuer told students during his homily. “It is that message that will get you into a great deal of trouble if you’re doing it right.”

Rev. Euteneuer, who has traveled more than one million miles as a pro-life missionary and has visited fifty-seven countries, told the story of the Martyrs of Brotherly Love. These martyrs were 20 Polish and German priests who volunteered to aid the suffering at the Dachau concentration camp at the close of World War II. Nineteen of the priests died of typhoid from their interactions with the prisoners.

“I tell you their story because it is a heroic example of love,” Rev. Euteneuer said. “I encourage you, brothers and sisters, that at this juncture in your life, to decide simply that you will give your lives in love. You may do many things—have excellent careers, make the headlines or live in silence—but it doesn’t matter how your life ends up in the record books. What matters is the book that Christ writes—the Book of Love in the Kingdom of Heaven. You want to be in that book.”

Saturday’s ceremonies began with a bagpipe-led procession from Christ the King Chapel to St. Louis the Crusader Gymnasium. Salutatorian Kyle Kelley of Wisconsin welcomed all the attendees and encouraged his fellow graduates to have hope as they enter the next phase of their lives.

“Hope is the driving force behind every good thing that has ever come about in the sad, confused world of human beings,” Kelley said. “Hope is the assurance that—in our struggle to accomplish God’s will and to create the best possible future for ourselves and those around us—we will never be lacking what we need.”

The Alumni Association’s Student Achievement Award was given to Sarah Miranda of Massachusetts for her years of selfless work in the community. Miranda participated in countless mission trips and led the student Outreach Club, which volunteers year round at the local Crisis Pregnancy Center, Habitat for Humanity, Meals on Wheels, and other local charities.

Following the presentation of awards to Rev. Euteneuer and Dr. Rice, Valedictorian Ryan Mitchell addressed his classmates, describing their graduation as a type of small death.

“Death is nothing but the separation of what should never part,” Mitchell said. “In graduation, we are separated from a life we have lived and from people we have loved. We have lived a life here fit, as Augustine puts it, ‘to melt our souls together, and out of many [souls] make but one.’”

Mitchell pointed out that, following this train of thought, life would appear to be a series of small deaths. Thanks to Jesus Christ, however, there is hope and life.

“We know that Jesus Christ has conquered death—He has trampled it down with His own death,” Mitchell said. “Through His death unto life, He has given all of our sufferings and deaths new meaning. He has made death the temporary separation before life eternal, and in doing so we can even say that He has made death like unto life. He has made all things new.”

Closing the ceremony, College President Dr. Timothy O’Donnell delivered his charge to the graduates. He called on them to be faithful and loyal members of the Church and, despite the many problems with which the Church is plagued, not to blame the hierarchy and the clergy.

“The work of reform must begin with ourselves,” O’Donnell said. “As members of the Church we must join to Her, and through Her, join to Christ our head, and His vicar on earth.”

He implored them to always love and support the Church and the Pope in joy and suffering.

“Each and every one of you in the Class of 2010—through your education, through what you have been given—have a unique and irreplaceable role to play in this great divine drama of our age,” O’Donnell said. “Always be men and women of the Church. Do not separate from Her. Do not betray Her—no matter what the cost, no matter what the temptation.”

All addresses given during Christendom College’s Commencement Exercises are available for download from iTunes.

View and download pictures from the event at Christendom’s Picasa Web Album.