Chapel of Christ the King Celebrates 15 Years – Looks to Future

On October 11, 1992, Dr. Timothy O’Donnell was installed as the third President of Christendom College. During the reception following his installation, he announced that the College was planning on building a new chapel, the Chapel of Christ the King. He also announced that he was going to raise funds for the much needed chapel by taking 15% of all unrestricted donations to the College and putting them toward the Chapel Fund.

The College community was excited, albeit a little skeptical that Christendom could raise the funds needed to build such a beautiful chapel. But O’Donnell expressed his confidence that if we “seek first the Kingdom of God” and build His chapel, all the rest will be added. And he was right.

On November 22, 1992, the Feast of Christ the King, a special ground blessing ceremony was held on the site of the planned Chapel of Christ the King. Just a few weeks later on December 6, the ground was broken for both the chapel and the St. Lawrence Commons building, which was located next to the new chapel site. By mid-December, the College had raised over $200,000 for the chapel project which allowed the College to begin paying for the actual construction which began on December 18, 1992. 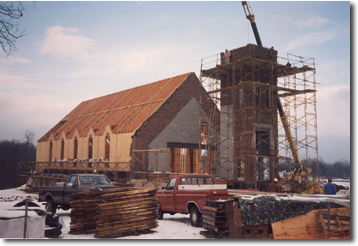 The Chapel of Christ the King was modeled on Sacred Heart of Jesus Church in Winchester, VA, built in 1870. Thanks to then-Bishop of the Diocese of Arlington John R. Keating, after Sacred Heart was closed, Christendom was the recipient of many of its furnishings, including the altar and the beautiful stained glass windows. As of February 1994, the College had received $506,653, almost half of the projected needed funds to complete the project, which was under the direction of alumnus Frank O’Reilly ’83, president of Petrine Construction.

According to the front page article of the February 1995 issue ofInstaurare, Christendom reached its fundraising goal for the Chapel of Christ the King, $890,225, by January of 1995, with a large donation of $100,000. This donation, made by Dr. Eleanor Kelly and her children in memory of Donald J. Kelly, substantially closed the fundraising gap. This then enabled Petrine Construction to guarantee a finished chapel by the planned dedication ceremony on April 8, 1995.

The College received many physical donations for the chapel, including the high altar (made of very rare and expensive pure carrara marble and restored through the generosity of alumni Frank and Angelique O’Reilly in memory of Frank’s father, the late Dr. Sean O’Reilly), stained glass windows, bell, holy water fonts, and Communion rail from Sacred Heart of Jesus Church in Winchester, VA; beautiful wooden pews from St. Edward’s Church (a closed church in Philadelphia); and stations of the cross from philanthropist Thomas S. Monaghan.

His Holiness Pope John Paul II was pleased to learn that on April 8 next you will preside at the dedication of the Chapel of Christ the King on the campus of Christendom College. He asks you kindly to convey to President O’Donnell and to all present his cordial greetings and good wishes on this happy occasion…With great affection he commends Christendom College to the intercession of Mary, Seat of Wisdom, and cordially imparts his apostolic blessing as a pledge of grace and peace in Christ our Savior.

On April 8, 2010, the College celebrated the 15th Anniversary of the Chapel of Christ the King. Fifteen years after the initial construction of Phase I of the Christ the King project, the sacred building is truly the heart of the campus, serving thousands of students over the years by providing them a place to worship God, receive the sacraments, and spend time in silent prayer.