Board member Douglas Dewey has been an admirer of Christendom College for decades. 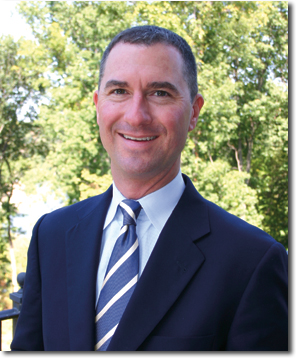 “Everyone I meet who is connected to Christendom is joyfully ‘walking the walk,’” Dewey says. Dewey’s introduction to the College came twenty years ago when his job brought him to Washington, DC. At his parish, he met Dr. Kristin Burns, a founding faculty member and current Dean of Christendom’s graduate school, as well as alumni Bob and Amy Hambleton.

“I knew from the start that there was something special about this place. It was more than a college, it was a cultural event,” he says.

As a combative pro-lifer, Dewey worked for George Bush for President in 1988 and later worked for the Bush administration in the Education Department. He then teamed up with a colleague to start a privately funded voucher program in the District of Columbia, called the Washington Scholarship Fund, which is still helping low-income kids attend private and Catholic schools. This program was the prototype for Dewey’s national Children’s Scholarship Fund, which has helped 111,000 children attend the K-8 schools of their family’s choice.

A native of Toronto, Dewey currently lives in New York with his wife, Leni, and ten children, two of whom currently attend Christendom—his daughter Frances is a sophomore and his son Dean is a freshman.

“The plan is to send all hundred grandchildren to Christendom, as well,” Dewey quips.

Dewey is currently a financial advisor with Bernstein Global Wealth Management. He believes that his liberal arts education did more for his career than any of the “practical” courses he ever took.

“A liberal arts education teaches us to ask the deeper questions about the nature of God and man, and, when done right, offers some compelling answers,” he says. “To be truly competent at anything, to speak with authority about your occupation, you must be able to say why it should be done at all. People who can read, write well, and think critically have an enormous advantage at the higher levels of any profession, over those who struggle with these things. An authentic liberal arts education, like the syllabus at Christendom, provides these lifetime tools.”

Dewey sees this as the greatest achievement of Christendom: producing winsome souls that are ready, willing and able to go out there and “restore all things in Christ.”

When asked what his favorite thing about Christendom is, Dewey says, “the food,” followed by a dramatic pause. “I mean the spiritual, intellectual and social food,” he continues. “This is a place that feeds students with all the best stuff this side of Heaven—they graduate mentally and spiritually fit, yet with a lifelong appetite for learning.”