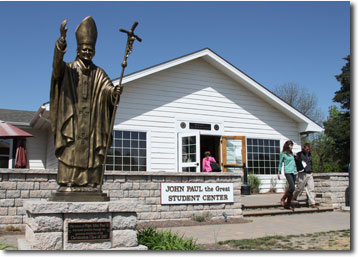 Christendom College boasts a strong affection for the office and person of the Holy Father, both present and past. Everyday, students pass by a statue of the late Pope John Paul the Great as they enter the student center which bears his name. The statue depicts the Pope’s winsome smile, full of paternal care, with an outreached and welcoming hand. Acting in this charism of love for the Holy Father, the Theology Department explored the greatness of Pope John Paul II by hosting two lectures this spring.

The first was given by College President and professor Timothy O’Donnell on February, 1 and was entitled “Why Pope John Paul the Great?” O’Donnell’s lecture focused on the many spiritual and historical highlights in the late Pope’s pontificate.

“In order to appreciate the historic magnitude of this pontificate, we must appreciate the state of the Church and the world at this time. They were times of chaos,” O’Donnell explained.

From aiding the fall of communism to seeking the unification of the Eastern and Western Churches, John Paul II made the head of the Church visibly present on a universal level in a way never done before. He presided over the canonization of many saints and beatified many holy men and women. His theological and philosophical works inspired many, O’Donnell said.

O’Donnell was present for the Pope’s election. “I still vividly recall the evening of October 16, 1978, when a young and vibrant John Paul II emerged,” O’Donnell recounted. “When his name was announced, there was an audible gasp and initial silence throughout Saint Peter’s Square as everyone began to realize that this truly was an historic moment.”

O’Donnell also spoke about his touching personal encounters with Pope John Paul, from blessing and kissing the heads of a few of O’Donnell’s children to presenting his book, The Heart of the Redeemer, to the Pope. O’Donnell was also one of the over three million who attended the Pope’s funeral.

“At the end of his life, he revealed to us how to age and how to die. In the midst of his suffering he always upheld the incredible dignity of the human person and the respect that should be shown to the aged,” O’Donnell said.

“The significance and achievements of this pontificate, which were worked out on so vast a scale, simply cannot be denied. This was a truly astounding man.”

O’Donnell concluded, “We add the voice of our College to the voice of the Universal Church in proclaiming him Pope John Paul the Great.”

“I thought his talk was moving, especially for someone who had personal experiences with him,” Sophomore Christine Nussio commented. “I only knew Pope John Paul for a short time, but hearing about Dr. O’Donnell’s experiences with him really brought my memories of him to life, especially the part of his pontificate that I wasn’t able to witness.”

On March 22, Prof. Mary Stanford delivered the second lecture entitled, “The Anthropology of Love: John Paul II and the Theology of the Body.“ Stanford, who holds an advanced degree from the Pontifical John Paul II Institute for Studies on Marriage and the Family, examined the Pope’s understanding of man’s relationship with God and his fellow man after the Fall.

“The first man and woman existed from the beginning in a relationship with their Creator. This relationship is best described as one of total and complete gift,” Stanford said. “Right from the beginning, they had known nothing else but God’s total generosity and care for them in the Garden. In this ‘dynamic of gift,’ God was the Supreme Giver, and they were the grateful receivers.”

Stanford said that Adam and Eve should have been striving for a deeper personal knowledge of God—the knowledge that comes from a loving relationship, from union.

“Instead they tried to acquire a kind of scientific knowledge of God’s divine secrets,” Stanford said. “That’s gnosticism! That is to understand God as a great magician, not a tremendous lover. They were duped into thinking that they could be divinized by information—by some set of facts—rather than through a transformation, a loving and grateful union with their Creator in whose image they were made.”

Stanford noted that it was no accident that the moment man and woman first sinned against God that they turned against each other. The body, which is designed to communicate—to “present” the person and to speak the “language of love”—can now tell a lie.

“Sin makes it possible to view another person as an object to take and possess, rather than as a gift meant to be received in a loving relationship,” she said.

“The talk was fantastic,” Sophomore Theresa King said. “It really related to my exegesis presentation for my theology class. The Pope’s insights into mankind were truly amazing.”

You can watch a personal encounter of Pope John Paul the Great with Dr. O’Donnell and Founding President Dr. Warren Carroll in 1991 on ChristendomTube.