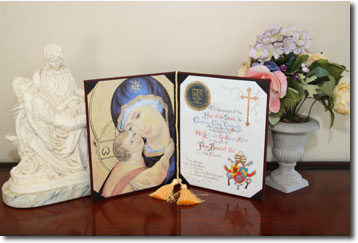 This week Pope Benedict XVI acknowledged the reception of a spiritual bouquet from the Christendom College community. College President Dr. Timothy O’Donnell received a letter from the Vatican’s Office of the Secretary of State, which imparted the Pope’s Apostolic Blessing on all who participated in the bouquet.

The letter stated, “His Holiness Pope Benedict XVI gratefully acknowledges the spiritual bouquet sent for his intentions. He very much appreciates the prayerful support given to him in his ministry to the universal Church. Upon all who have remembered him in their prayers the Holy Father invokes joy and peace in our Lord Jesus Christ and cordially imparts his Apostolic Blessing.”

While in Rome this spring, O’Donnell presented the spiritual bouquet to Frances Cardinal Arinze. During a meal with the students of Christendom’s Junior Semester in Rome, Cardinal Arinze accepted the bouquet on the Pope’s behalf and promised to personally deliver it.

O’Donnell says that members of the Christendom community have a special devotion and charism for the person of the Holy Father. “Especially since recently he has been attacked and vilified by the press in a number of ways, it is crucial that we as Catholics express our loyalty and support for him as a priest and as the supreme teacher.”

The bouquet was given as an act of thanksgiving and solidarity during the Year of the Priest. Contributions were collected over an eight-month period on campus and on Christendom’s website. The bouquet enumerated 1,343 Masses, 556 Holy Hours, 2,225 Rosaries, 637 visits to the Blessed Sacrament, and 1,202 Chaplets of Divine Mercy.

“I do hope that this gave him some consolation as he continues to shepherd the church with such courage and fidelity,” O’Donnell says.