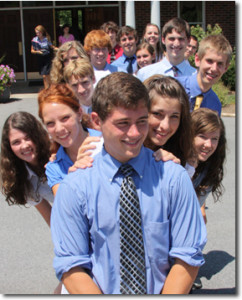 Last year, the college held three sessions of the ECSP, which seeks to introduce prospective students to the college’s unique academic, social, and religious offerings. Approximately 45-50% of the participants normally choose Christendom for their undergraduate education, and this year is no different.  Almost 45% of the incoming freshmen Class of 2014 attended one of last year’s programs, showing the amazing effect that the program has on the participants.

“It was an amazing experience for all who participated. It was like nothing I’ve ever experienced and I didn’t want to leave,” remarks high school junior Flannery McGale, of Virginia Beach, Va., who took part in the second session.  “Everything was unsurpassable in quality – from the intellectually challenging courses to the enthusiastic counselors, the never-ending fun-filled adventure and bountiful feasts! I enjoyed the counselor’s captivating tales of scholastic conquest in the academic world as well as the spiritual gains of the ‘Breathe Catholic’ atmosphere of the Christendom College campus.”

Each summer, Christendom welcomes many students to campus who, at first, are a little unsure of what to expect from a summer program that is advertised as a type of “Catholic immersion program.” Some students are afraid that there will be a bunch of “religious fanatics” on campus and others think that the place will be full of nerds. Some think that it will be just like going to school in the summer while others believe that it will be “mind crushingly boring.”

“At the end of each session, I ask the students to fill in a survey, and about 90% of the participants gave the program a 5 out of 5, while the other 10% gave it a 4 out of 5 grade,” says McFadden. “All of the participants agree that the program was better than they expected it to be, and quite a few say it was one of the best weeks of their lives.”

According to rising high school senior John Robert Griswold of Hilton Head Island, SC., Christendom was the last place he wanted to go to college, let alone a summer program. But his parents thought that a week at the ECSP would be beneficial. He had made many assumptions about what the college was like and what type of people attended. But his impression soon changed.

“Perhaps the only assumption that was proven correct by that memorable week,” says Griswold, “is that the lifestyle at Christendom is the antithesis of that experienced in the campers’ hometowns. Yet, unexpectedly, that lifestyle is superior in virtually every conceivable way.”

Participants take classes in the morning, taught by Christendom faculty members, and then following Mass, and lunch, are given the opportunity to take a Scripture study class taught by College President Dr. Timothy O’Donnell.

“A teaching president is a rarity in today’s world of higher education,” says high school senior Timothy Mire of Dripping Springs, Texas, “so it was a real treat having the College President teach us every day. He was awesome!”

In the afternoon, after adoration and time for confession, the students have some down time where they play some sports, go on a hike to Skyline Drive, or go off a rope swing into the glorious Shenandoah River. And in the evenings, students take part in a variety of entertaining activities, such as a swing dance, an Irish barn dance at the President’s home, a home-cooked steak dinner at the Admissions Director’s house, a talent show, and other fun events. All in all, it ends up being one of the participants’ best weeks of their lives.

“On the camp, I was able to discover what all those ads meant when they stated ‘Breathe Catholic.’ Every aspect of every activity within each day during that glorious week pointed to our Catholic identity. From attending Mass to discovering the foundation of Philosophy to merely forming wholesome friendships, my fellow campers and I began to appreciate and take pride in our Catholic Faith,” says high school senior Christina Heisler of Front Royal, Va.

“People are constantly surprised that a one-week program can change their lives,” says McFadden. “But it can, and if you do not believe me, then at listen to what the participants themselves had to say. We did some group interviews with two of this past summer’s sessions and have put the videos on our website and on YouTube. I think you will be amazed at what they have to say.”

“Before coming to Christendom I heard the interviews online and my mom told me how tons of kids said their lives were changed by the program and it was the best experience of their lives,” says high school junior Micah Davis from San Antonio, Texas. “I thought that these kids were crazy and just needed to get some actual friends.  After about the second day at camp, I realized I was just like every other kid who came to the camp. I met friends and after only a few days it seemed I had known them my whole life.  My week at Christendom was the best week of my life and I most definitely want to spend my college education at Christendom breathing in a Catholic atmosphere.”
To view pictures or videos from the various “Experience Christendom” Summer Programs, click here.