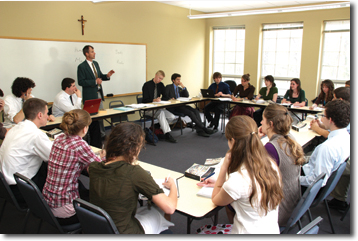 Christendom began its 34th academic year on August 24, with an enrollment of 409 students, hailing from 45 different US states and 7 foreign countries. In spite of seemingly bad economic times, Christendom’s admission office reports its best recruiting year in its history, and looks forward to greeting all of the new freshmen this fall.

Admissions offices across the country rely heavily on certain amounts of data that they collect throughout the year to determine how the recruiting year is progressing and whether they are on target for the following fall. The main areas of concern are the number of people who have requested information about the college, the number of high school seniors from which to recruit, and most importantly, the number of applications received.

Christendom’s admissions office reports tremendous growth in all of these important areas. The number of general requests for information rose 29%; the number of high school seniors who expressed an interest in Christendom is up 18%; applications for the Fall 2010 semester are 19% higher than this time last year; and the number of deposits is up 21% over last year. The college’s freshman class is 23% larger than last year’s, the student body has grown by 5%, and the College had to re-institute its waiting list this year.

According to Tom McFadden, Director of Admissions, the growth in interest can be attributed to a number of different important areas that he and his team have been focusing on over the past year.

One of the most important areas is the amount of time and effort they have been putting into building relationships with potential students and their schools. Associate Director of Admissions Mike Schmitt has been hitting the road all year, visiting many Catholic high schools and parishes to meet with students, college placement counselors, as well as pastors and youth ministers. In addition to this, the College has been represented at dozens of conferences and college fairs across the country.

Another initiative that bears much fruit are the “Experience Christendom” Summer Programs, held each summer for rising high school seniors. Forty-four percent of the incoming freshman class attended one of these programs last summer, thus indicating the positive effect these programs have on prospective students. This year, the college held four one-week sessions of the program and welcomed 160 students to campus, with enrollment up 51% over last year’s programs.

Additionally, Christendom has seen a large growth in interest from Virginians over the past year. Typically, approximately 25% of Christendom’s freshman class is comprised of Virginians, but this year, 39% of the class call Virginia home.

“Last year, 23 of the 91 freshmen were from Virginia and this year we have 43 of 112,” says McFadden. “As economic times get a little tougher, it is no surprise that Virginians are beginning to look at more in-state colleges. Christendom is one of only two Catholic institutions of higher learning in Virginia—making it a good choice for those interested in a private, residential Catholic liberal arts education.”

Saving on travel expenses is one of the factors McFadden says effects a student’s decision to go to an in-state school. Another factor is the Tuition Assistance Grant (TAG)—1,300 a semester offered by the State to Virginia residents who attend in-state private colleges or universities.

Jordan Mann of Lovettsville, VA, says he chose Christendom because it was the school that best integrated the Faith with every aspect of life, “from the most fun game to the most difficult assignment.”

Mann is also impressed by the alumni he has met from Christendom.

“They have been able to do wonderful things for the Church and their communities because of their Christendom education. I decided that this is the kind of education I want to have so that I can do comparable things with it,” he says.

Nussio says she chose Christendom because she saw that it was “spiritually rich and academically challenging.”

“I wanted the benefits that Christendom offers to every student, a residence hall that feels like home, a curriculum that never ceases to be fascinating, collection of students, faculty, and staff that form a family, and the most beautiful Sacrifice of the Mass offered at the heart of the campus,” Nussio says.

The rest of the freshman class comes from 29 US States and three foreign countries.

“This economic recession has impacted Christendom in a good way,” says McFadden. “You have to be flexible—be able to adapt—and have faith in God in this job market, and nothing prepares you better for that than Christendom’s liberal arts education. People are realizing this, and I think that is why we had one of our best recruiting years ever.”