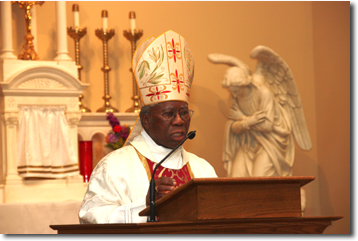 “It is better to support a good Catholic higher education institution than to agree that some of the big ones are not doing well,” Francis Cardinal Arinze told guests at Christendom College’s Annual President’s Council Visit Weekend held September 17-19. “It is better to light a candle than to discuss and condemn the darkness.”

Guests were able to soak in the atmosphere of the College over the weekend by attending classes, taking tours of the campus, and enjoying a pontoon boat ride on the beautiful Shenandoah River among other events.

Students, faculty, and guests attended two Masses offered on Saturday and Sunday by Cardinal Arinze, Prefect Emeritus of the Congregation for Divine Worship and the Discipline of the Sacraments.

“A Catholic university should stand out as a higher educational institution that promotes dialogue between Faith and reason,” the Cardinal said during his homily on Saturday. “While each academic discipline retains its own integrity and has its own methods, Catholic theology plays an important role in the search for a synthesis of knowledge as well as in the dialogue between faith and reason. The light of the Gospel illuminates the entire atmosphere of the institution.”

“Such a person is not carried away by opinion polls, or what others are doing,” Cardinal Arinze said. “If some other people are cheating on public funds, deceiving in matters political, contracepting, or committing abortion, a Catholic who has been well-formed is expected to see the evil of these actions and to behave differently.”

“It is my prayer that the Lord may bless you—those who have given of their time or talent or treasure, and that the Lord may see that you don’t become poor just because you give to Christendom College,” the Cardinal quipped.

The weekend concluded on Sunday at a champagne brunch with Cardinal Arinze following the 10 a.m. Mass. At the brunch, students presented the Cardinal with a spiritual bouquet in thanksgiving for his extraordinary support of the college. Over the past 8 years, Cardinal Arinze has met with many groups of Christendom students studying in Rome, has been to Christendom’s Front Royal campus on numerous occasions to deliver lectures or attend celebrations, and, most recently, he delivered a spiritual bouquet from the Christendom community to the Holy Father, Pope Benedict XVI.

“It was so great to see the Cardinal here, after meeting him in Rome. I feel like we’re friends,” Senior Noreen Daly said. “We love him and he loves us. He talked about how some Catholic universities aren’t doing the right thing, but Christendom is. I think he sees Christendom as the future of Catholic colleges. He wants what we’re doing to spread.”

Cardinal Arinze will once again be returning to the Christendom College campus next July 8-9 for the college’s 2011 Annual Summer Institute, which will focus on Dignitas Humanae: Catholic Teaching on Bioethics.

The homilies given by Cardinal Arinze during the weekend are available for download on iTunes.
See more pictures on Picasa.