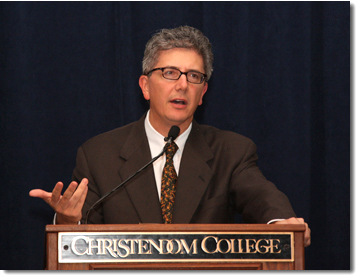 In his talk, entitled Defending the Faith, Defending the Word of God, Hanna related how he established the Mater Verbi/Hanna Papyrus Trust, which sought to acquire for the Vatican sections 14 and 15 of the Bodmer Papyrus from the Martin Bodmer Foundation. The Bodmer Papyrus is a set of papyri which were discovered in 1952 at Pabau, Egypt. Dating back to A.D. 175, the papyri contain the oldest copy of the Gospel of Luke—and the oldest copy of the Lord’s Prayer—in the world.

Hanna, CEO of Hanna Capital in Atlanta, Ga., and author of the best seller What Your Money Means, told students that his efforts to acquire the papyri for the Vatican were the beginning of “a defense of the Faith” for him.

Hanna explained that the Christian faith is one that relies on the spiritual nature of man, but also embraces the corporal nature.

Hanna said that while we cannot prove that Jesus was God made man, we do have a lot of proof that Jesus was a real man, that many people believed he was God, and that they were willing to die for that belief.

“The better preserved the records of those events are, the better it is for all of us and our faith,” he said. “And the [Bodmer] Papyrus helps us to preserve that record. When we cling to those records, it is like clinging to photographs of a loved one.”

Students discuss the Bodmer Papyrus further with Hanna at a reception following his talk.

The Mater Verbi/Hanna Papyrus Trust was able to purchase the papyri and, in January 2007, Hanna presented the papyri to Pope Benedict XVI. They were transported from Switzerland to the Vatican with a high level of security that Hanna compared to “a James Bond movie.” They shut down the airports in Switzerland and Rome while police escorted the package to the plane with machine guns. Once in Rome, it was transported to the Vatican Library by an armed motorcade with a helicopter overhead, Hanna said.

The papyri are kept in the Vatican Library today and are available for scholarly review.

“The talk was really interesting,” Junior Blaise Buckner said. “He was an engaging speaker and it was nice to hear from someone in the business world who is a great example of what it means to be a Catholic layman.”

Hanna, who was instrumental in the foundation of three Catholic schools in Atlanta, was excited to be at Christendom.

“As a business guy out in there in the world, it’s great to be able to come here and be something of a sponge and soak up what you all have—to soak up some of the spirit, enthusiasm, vigor, and grace that you all have,” he said. “Thank you for the witness that you’re giving to the Church.”